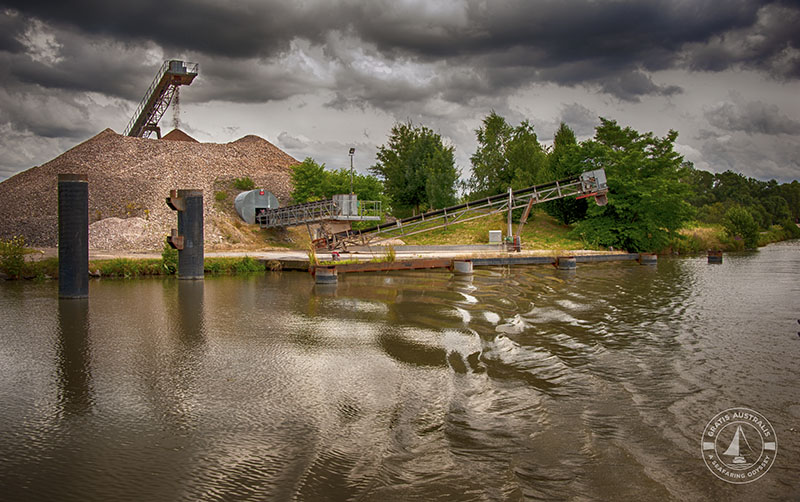 Entering the locks continually caused issues as the fenders rose upon connecting with, then proceeding to run along the walls. This in turn meant the hull was no longer protected and Gratis new paintwork was damaged. Today we experimented with the fenders by lowering them until they sat horizontally upon the water rather than vertically just below the rubbing strake. What a difference! A slick was created, thereby preventing our girl from touching the walls, which in turn protected her paint. Although a little more work was required with the raising and lowering of the fenders upon entering and exiting each chamber, the exertion was well worth it.

Not long before entering Chevolet the canal narrowed. Of course, Murphy’s law came into play as a large barge approached from ahead. Captains, beware not to wander to near the bank, for you may find the hull scraping below.

Soon after hitting bottom, white smoke rose from the exhaust, which didn’t bode well. On to the helm went I, whilst in the pilot house Bob raised the hatch to the engine room. The water hose had disconnected from its perch. Appearing to be a loose connection, a bit of tinkering and the problem was resolved – or so Bob thought!

By Lock Thaon at kilometre 77, much to Bob’s disbelief, the hose had popped twice more. Further investigation and the problem appeared to be a cracked water house. An in – depth examination was required: we just had to find a suitable spot at which we could stop awhile.

A short distance on, we came across a lonely mooring area: the perfect place!

Of course, there was now no water entering the engine and at this point, the engine alarm chose to shriek, alerting us to the engine overheating. Off went the motor! With enough motion behind her, Gratis continued gliding toward shore as Bob turned her into the wind whilst I waited ready on the ignition. Almost there, at his command, the engine burst into life for a short duration: just enough to enable him to bring our girl to a halt as he berthed her alongside the bank.

Returning to the engine room, further investigation proved there were multiple issues: it never rains, its hails!!!!!!

The problem wasn’t the hose, there appeared to be a blockage in the inlet and this in turn meant no water getting through the hose. After appropiate curses and labour in an akward place, the blockage was cleared. Bob remarked that along with his ocean going yacht master ticket he needed to be a dwarf with yoga qualifications!

On went the engine, all working fine: for about 20minutes that is! Then the flood alarm went off once more. Off went the engine once again – thankfully we had decided to wait awhile to ensure all was working well before heading off. What the !#* again? It turned out a grease nipple had rusted and broken, thereby releasing the ball that sat within. No spare available, Bob jury rigged a device: problem solved.

With euphoric elation, the key turn and Big Bertha roared. Out at the stern, I was watching the water outlet. Bad news, as black smoke spewed forth and little water came out the exhaust. Again, we shut the engine down. ( If only we could sail in the rivers & canals of Europe. It would save a fortune in fuel , reduce pollution and no engine noise!)  Bob went through all the systems to do with the cooling water and at long last found the culprit: the impellor in the raw water pump had broken off all blades and so no water flow.

Now it was a matter of finding the replacement. Bob has a habit of finding new places for storing gear in the boat without telling me. Let’s just say that my article list for the boat gear is no longer viable and precious time is often lost in chasing down specific items. This was one of those moments and black smoke was streaming from his ears as valuable time was lost chasing said piece down. It took a while and the boat looked as though a bomb had hit it, but finally the required parts were uncovered.

Impellor finally replaced, Big Bertha came to life: a heap of air and black muck, and a big stream of water: yes!!!!

Four and a half hours later, Gratis was on her way once more.

Past a few more loading areas: this one happened to be sand or stone.

It’s amazing what you see along the way. People come up with such interesting ideas.

Just prior to six we arrived at Lock Moulin. Too late!! An early night for the operators who had locked up well ahead of closing time, but this is France, ‘c’est la vie’.

No complaints though, as our evening wander led us through Charmes which was another delightful little town. Leading up to the township, a line of caravans that was packed full with summer campers.

The images aren’t that great as I only had the point and shoot, and the best angles were hampered by one thing or another, but they give you an idea.

Eglise St Nicolas, first constructed in 1493 was an interesting little find. It was the facade that drew us in. The statue at the base was St Nicolas.

World War Two memorial window, stunning statues and several paintings which included the images depcting the positions of the cross.

Outside the church, another memorial commemorating those who died in the wars  in front of the doors.

There is generally a rooster to be found with.

On the corner of a building – St Nicolas is the tall guy.