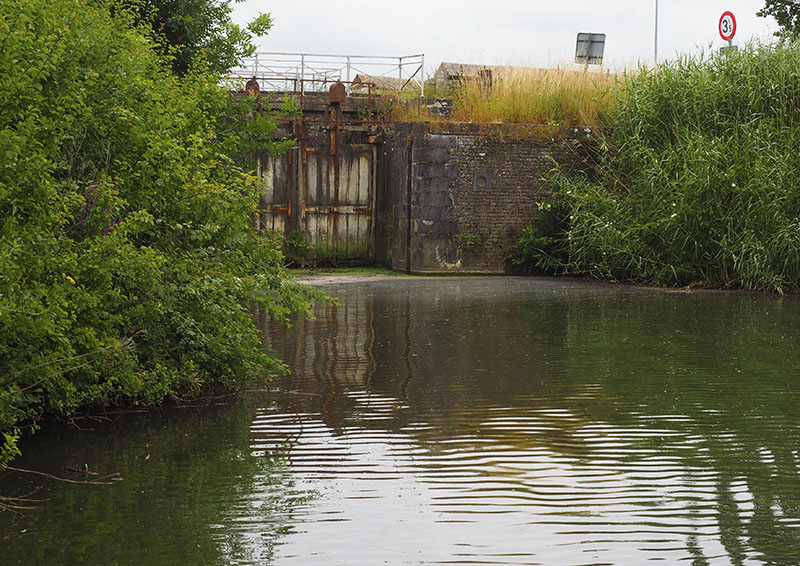 What an exquisitely beautiful fourteen and a half kilometre section of waterway and countryside.

Having spoken to the lock keep er the afternoon before, 9am saw the lines released, and the heritage Fintele lock entered. With its sloping bricked sides aligned in blooming masses of colour, the water slowly rose.

The wooden gates at last opened, then Gratis was truly on her way.

Not much room to spare for Gratis.

bordered in sections with waterlilies readying to bloom, it was another of the hidden Belgian secrets.

In the scheme of things, it was a narrow waterway, not suitable for smaller boats to race past. Poor Gratis  found herself way too close to the edge for our liking.

Aged wooden gates, just visible through the greenery, told of a time when smaller canals were still used by farmers in their watercraft.

In places, tufts of grass growing in the canal’s centre had to be avoided.

A few short hours and we arrived at the intersection that would lead us into Veurne. To the right was Nieuwpoort, whilst a sharp left turn led the cruiser toward France.

To the left turned Gratis.

With lowest recorded depth in the book listed at 1.6m, we found it ranged between 1.5 and 1.9m. Averaged out, the depth sat at 1.7, with the lowest points lasting only a few short seconds.