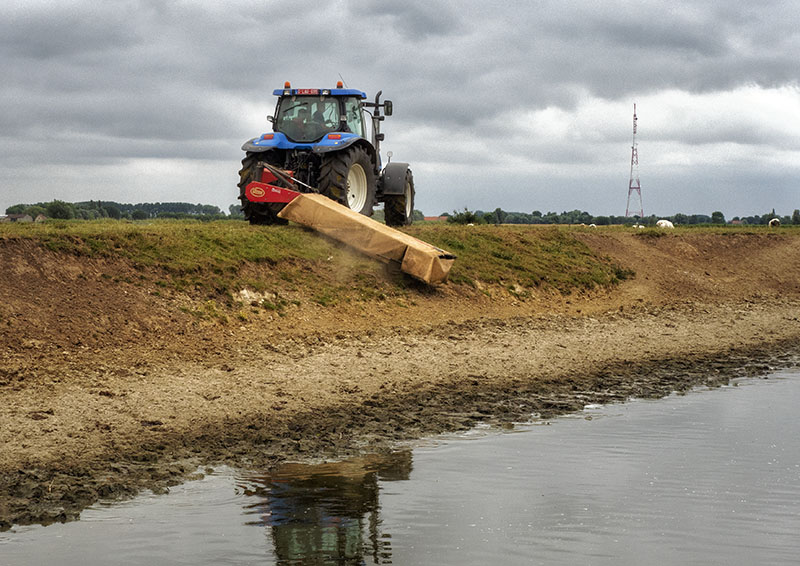 Continuing upon the Ijzer, the day’s destination was Fintele, a short 6km away.

We didn’t think the scenery where only distant church spires denoted the presence of townships could become any more picturesque, but it did.

With a depth of mostly 1.8m, there was only one point at which Gratis gently rose and fell: we figured it was a hidden log.

In this section of waterway, brightened by splashes of pink, white and yellow amongst the myriad of green bordering the banks, the river meandered its way through open farming country in which cows grazed or stood at the water’s edge slaking their thirst.

As always, the birds were always ready to provide a laugh.

These little coots were searching for food hidden within the grass where the farmer in the tractor above just happened to be mowing. In their bid to escape, they scurried to the water’s edge only to discover the ‘cliff’. Not stopping to think, over the top they lept, tiny wings flapping, to land in the water below with a massive splash!

The ducks never failed, continually taking flight, only to land a few metres ahead of their previous location…..

You can see from whence came the saying ‘walking on water’.

Here, between Diksmuide and the French border, the left hand side of the river bank was left unfettered by dikes, allowing the natural flooding of the Ijzerbroeken (plain) in times of heavy rains or melting snows. So fertile is the landscape that thousands of geese, ducks and wading birds spend the winter, whilst at the welcoming warmth of spring it isn’t long before the migratory birds arrive for the breeding season.

How about the size of the feet on this little fella!!!!!

One of the shy critters we often see.

Not far from the night’s mooring, we later came across an information board detailing some of the birds to be found in the region.

Arriving at Fintele, it was to find a small hamlet set within a farming community. During its heyday and up to the Second World war, a population of 200 inhabited the township.

A great little mooring, where you could pay for a berth at the nearby restaurant. No power was available, but it was a perfect spot from which to discover the surrounds.

There was even a wedding party heading off in the traditional manner of old.

Situated in a meadow where the current day restaurant now stands was the Hooipiete. Between the 17th and 19th centuries, this was the means by which the farmers traversed the Ijzer for the purpose of harvesting hay from the marshes and enabling the cow herds to graze on the grasses found there. Initially a drawbridge, it was eventually replaced with a fixed construction that was erected at the commencement of each summer season, then demolished at the turn of Autumn. Sadly, with an increase in pleasure boating during the late 1980s, this centuries old practice came to an end in 1990 when the bridge remained in place, never to be demolished since.

In the photo of Gratis you can just see that taller bridge to her left.