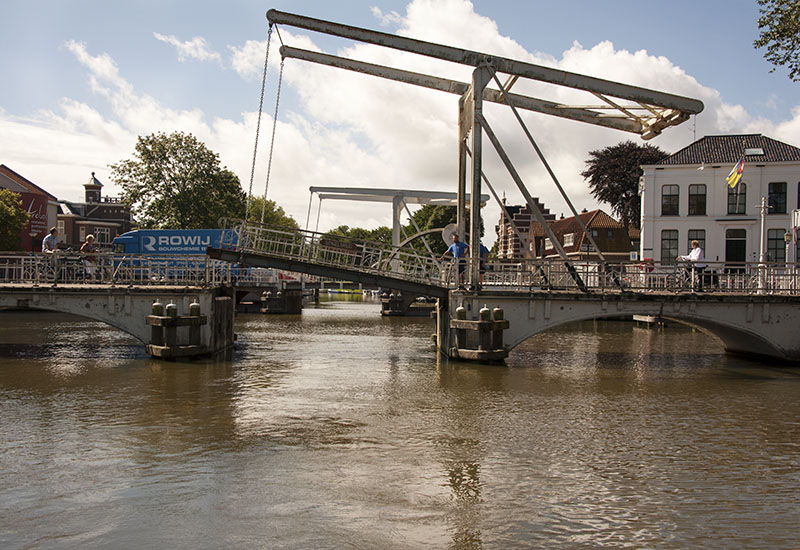 A short 8km motor brought took us to the outskirts of the port side town of Harlingen this morning. Just past the Konigsbrug, we exited the Van Harinxmakanaal and found ourselves winding past a multitude of moored boats – which Bob intently studied in passing.

On arrival at Industriebrug, Bob phoned the bridge operator, who arrived five minutes later. Bridge open, through Gratis moseyed: here, there were even more boats in varying shapes and sizes. Soon after, the channel narrowed yet further and houses lined the banks.

Upon exiting the channel, we found ourselves in a rounded waterway crossroads where bridges prevented further passage forward. No VHF channels or phone numbers provided here, we discovered. That explained the book notes saying to enter via the northern lock rather than Singelbrug!

Calling the previous operator, I asked if it was possible to pass through, or whether we had need to return whence we had come.

‘We’ll be there in five minutes,’ was the surprised response, whilst onlookers from above watched the action below.

In less than the time predicted, a couple a of men in blue rode up on their bicycles. Dismounting, they released locks and chains, then proceeded to manually turn the mechanism which lifted the bridge. All the while, conversations between them, a few interested passers – by and us took place.

With a cheerful goodbye, we were waved through – you can just see the person in the process of lowering the bridge, and Gratis continued between the two rows of boats that also lined the banks in this peaceful canal.

A short distance on, an attractive mooring close to the main town with a green belt right alongside.

Off came the bikes, and out we headed to get a feel for the township. The coming few days promise to be most enjoyable.

Yes, we just had to return to take a pic of the bridge.