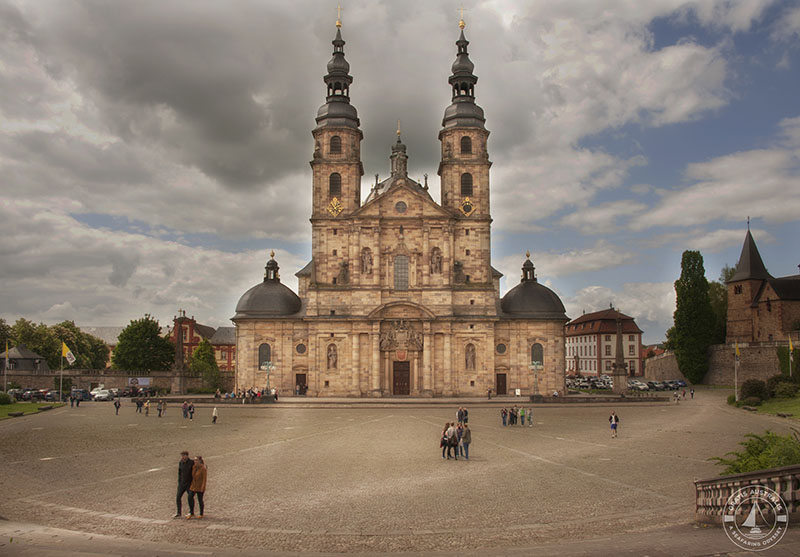 Just a few kilometres down the road was the Fulda River and township of Fulda with its massive Benedictine Monastery that was first was founded in 744 by St Boniface’s disciple, Saint Sturm. In latter years, it served as a base from which missionaries could join Charlemagne’s military on campaigns. With renovations and rebuilds taking place numerous times, the crypt dates to the construction of the original abbey, a 9th century chapel and foundations of a women’s abbey stand nearby, whilst the main church was converted to the Baroque style in the early eighteenth century.

How was this for creativeness!

We loved the ceiling work, organ,

and entranceway to the monastery.

In Stepfershausen, a town unique in that it rests above freshwater springs, we visited with some Adelaidians who had made the decision to move to Germany. It was in this tiny township that they chose to reside and now live on a tract of land that houses the old farm house which they lovingly renovated, a barn, bakery, pigeon coop, accommodation for the workers and more. In its heyday, this was a farmhouse that was totally self – sufficient, but sadly, the buildings fell into disrepair during the time of communist rule.

Sadly, the initial beginnings of this tiny farming township have been lost to the annals of time. Two versions of oral history are all that remain. In the first, one of the town’s leading familys say it was their ancestors who came and settled from elsewhere in Germany. The second is told by a small community that resides a short distance away, and is the version that seems most plausible. They relate how a family dispute resulted in one group departing and setting up their own farm in what is now Stepfershausen.

Why do we favour the second account of events, you may ask? Unlike all other towns, Stepfershausen was not constructed next to a water course, hence the 2nd version making most sense. Only prior local knowledge of the underground water supply would have enabled the first settlers to make this a successful a settlement. Until the Russian regime, the town’s water came from the underwater spring that fed the fifteen water troughs placed throughout the township. (Sadly, oil emptied into the stream at the commencement of the watershed put a stop to this, and their water source is now fed in from elsewhere) 15 troughs.

The town’s written history dates back 1200 years and recent archaeological findings have placed the Celts there even earlier. Our friend’s house has sections of the old ‘palace’ (really the equivalent of a Scottish keep) which was already in ruins well by the 1700s.