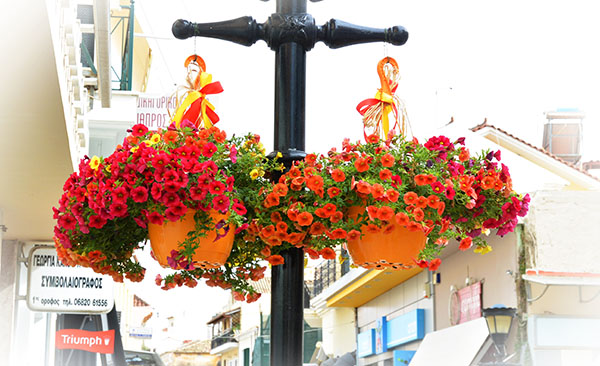 The full on blow predicted for the night before didn’t eventuate, with winds only topping 32 knot wind gusts. Even so, one gleaned an insight into the conditions upon the moorings here should a 50 knot southerly blow through. Boats rocked to and fro, up and down. Anchored close together, the concern was of masts entangling and anchors dragging. There was nowhere to go for a quick getaway here.

Having tied to the mooring before letting the anchor go, a hired sail boat was the first to go as the anchor let go. Not a good idea to just drop the anchor straight down. Next to pull out was the yacht two down. Anchor rattling, engine roaring, out the captain steamed: just missing our next door neighbour who raced to the bow of his newly painted Roberts 44 Mauritius – whewwww!!!!!

A check of the weather, calm seas with rain the prediction, of we set for Preveza: the aim, to check out of Greece on Monday.

Calm seas, they said? What a joke! Three hours out, try 45 knot wind gusts beam on, and building seas that sent Gratis rocking and rolling like those tippy men that we used to own as a child. Turning the boat with the intention of reducing the squall’s effect, landward we continued, still holding on for dear life as not one, not two, but three or four larger waves rushed beneath us. It was only as we gained protection from the hills bordering the coastline that conditions at last improved.

Heading into the river estuary in which the township of Preveza was situated, Gratis was occasionally pushed off course as an unseen current attempted to have its way. At last Bob turned off AP. To our right, high peaks enshrouded in wisps of low lying floating cotton wool that drifted leisurely through the valleys. On the left a township resting behind walls that kept the sea at bay: a salt marsh in times gone by?

A walk into town to stretch our legs, a mix of old and new it was a place on an upward swing as renovations were in full swing on many. In hidden winding alley ways were found myriads of restaurants, each with their culinary delights tempting the visitor’s palate.