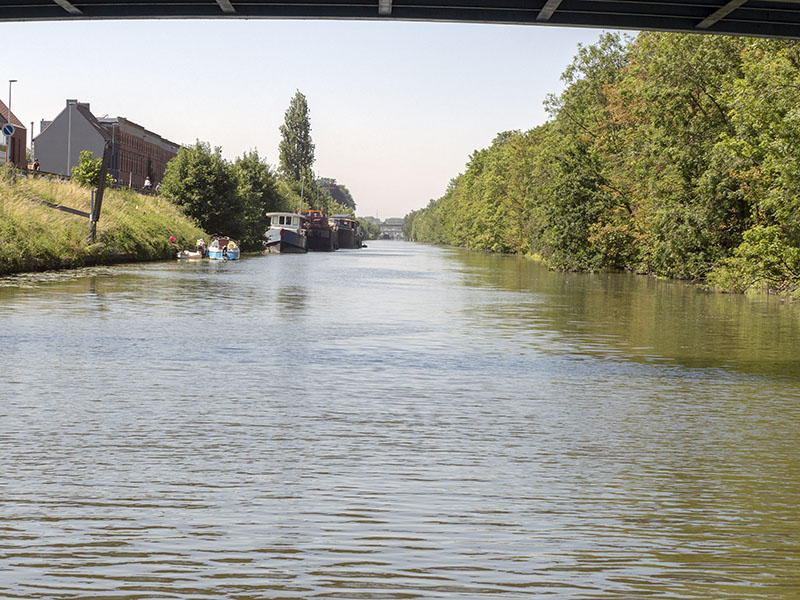 Having been given the incorrect data pack in the Netherlands (you really need to check that it is the international pack you are given prior to handing over the cash), we discovered our phones no longer worked on crossing the Belgian border yesterday. This meant a trip into Gent was required, so an unintended excursion was made to Portus Ganda, where we met some lovely New Zealanders who are also travelling the canals.

Last night, Bob and I made the decision that rather than journey on the busy commercial Evergem Lock route, we would exit Gent via the Visserijvaart Kanal.

Unfortunately, my phone internet refused to work this morning, so our early start didn’t take place and a change of plans was required, since the bridge and lock on this section only operated between the hours of 7-8am, 11-12 and 5-6pm.

Instead, we retraced our steps to the Tolhuis lock, where it was also possible to purchase the required vignette for traversing the non – commercial waterways in Belgium. A good chat with the lock keeper confirmed it was possible for Gratis to traverse both the Verbindingskanaal and Brugsevaart, thereby avoiding both the rail bridge and further on, the busy Evergem Lock system.

What a peaceful little motor this was, and although only a ‘massive’ 1km shorter in length, time was certainly saved on the waits for the train bridge and Evergem Lock.

On arriving at the Ring Route junction, we did find the water depth rapidly dropped from the 2.5m of the canal to a mere 1.4m – obviously the result of being on a corner. Not a problem, though, as Big Bertha carved a channel through the sludgy mud to escape its sticky clutches. Turning almost 360° back on herself, Gratis entered the Ring Route, pointing her bow towards the section of the Leie not traversed last season.

Arriving at the intersection just before five, we were presented with a few choices: a left turn would take us through an old lock entrance where a number of marinas were situated, or continue to the right and take a chance that the couple of moorings or marina a couple of kilometres down the track would have a spare berth. Making the decision to head left first,

we discovered only one mooring available: with this being the time of day that cruisers went in search of a place for the night’s rest, Bob and I chose not to take a chance and snapped up the one remaining spot in the Koninklijke Yacht Club Gent. Very much a holiday destination, it was a little rocky with all of the power boats zipping in and out, but by night fall this would fall off and peace descend. With all conveniences, it was perfect for the night.

Note:
Our New Zealand friends took our intended route upon the Visserijvaart Kanal. The section that would have led them straight down to the ring route was blocked, so soon after passing through the they found themselves having to take an alternate route that exited in the marina at which we spent the night. Sadly for us, during our initial look at the marina, Gratis hit bottom at the far end, meaning this section of waterway is no good for a boat with 1.5m draft. That of our friends is 1.3m: small in the scheme of things, but none – the – less it makes a great deal of difference.