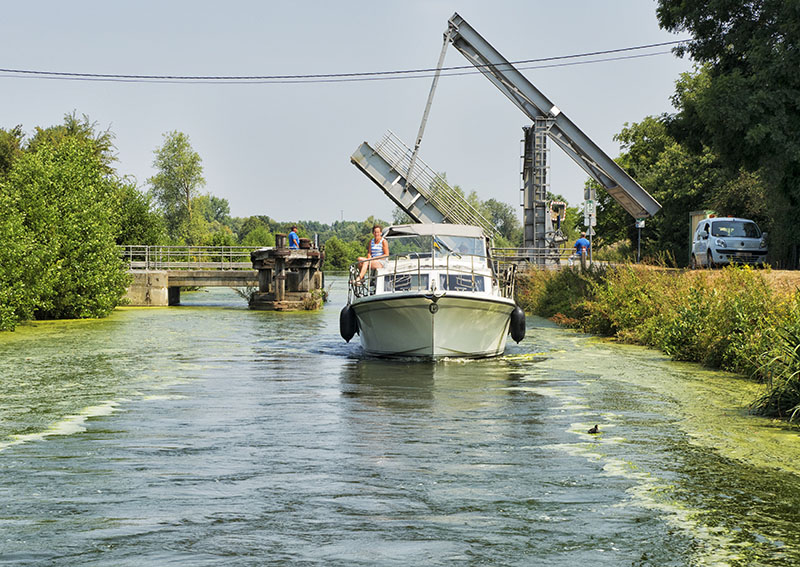 Prior to departing Geraadsbergen, we made the required phone call (0675679124) to the office of those operating the locks and bridges upstream, notifying them of our coming.

This was the section of the Dender River that was causing the concern, as the English canal books were all stating a 1m or less draft was required.

The lock keepers at Ath proved correct – we later discovered that the canal had been dredged to a depth that allowed boats with a 1.8m draft quite recently. Other than for one or two small high spots, it never went below 1.7m in the centre of the canal, and that was for a few short couple of kilometres. Was it not a year of drought, the water levels would have easily sat at the 1.9m detailed in the Belgian books.

As the journey continued, the countryside became increasingly more beautiful as farming country

took over from the factories. The scent of summer wafted across the air, the humid heat building as the temperature soared into the low thirties. This was more like it!

It’s amazing what you see stored beneath the bridges and in the fields.

Damsel and Dragon flies flittered busily around the water’s edge, occasionally finding a pathway through the cockpit: so close one could reach out and touch them, whilst blue cranes hid before skittishly taking flight as Gratis approached.

and operated the locks. All manually controlled, for us it was like stepping back in time. What a pity it will be when this is lost to progress as each lock is gradually updated to run on automatic.

Bob and I found the personal contact quite a refreshing change.

Lack of rains had created a sea of green upon the waterway.

Ducks were their typical selves

and it’s not a good image, but we finally caught sight of a different bird species.

It was a delightful day.