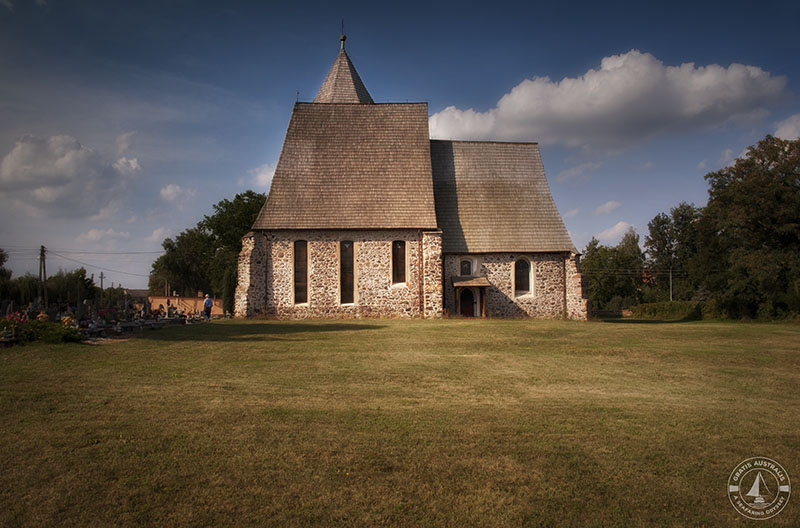 For people with dietary issues, be aware! During our first 24 hours in this region of Poland, we discovered it became increasingly difficult to source wheat/gluten free foods – often its meaning wasn’t understood. Scrambled eggs, sautéed grilled meats and so forth will most likely contain the ingredients. It was best to keep to the plainest of foods.

A few shots from the car as we passed through Gorzow Wielkopolski.

First a short return trip to Chwalecice for taking a few more pics.

This day’s search, like yesterdays, yielded very little. That disappointment aside, the region was beautiful, and we all delighted in the Bauerkulture churches (as seen in main image). I haven’t been able to find any information specific to this type of construction, but know the term itself means ‘farming culture’ when translated. My assumption is that it refers to buildings contructed out of materials and in the same manner as those in which the people residing within the farming communities dwelt.

We discovered most cemeteries in the region appeared quite new, Roman Catholic and often locked. In those few showing age, grave dates generally went only as far back as the 1950s. It made sense when one thought about it. The Polish peoples had only resided there since the mid 1940’s.

Travelling to Scinawa, we encountered roadworks of gargantuan proportions well underway. Taken from the car, they ar not the best images, but give you an idea.

We just had to stop here for a quick pic of the lovely couple.

Once named ‘Steinau an den Oder’, this was the last Silesian town in which my ancestors had resided and from which we believe Gottlieb Carl Gustav Friebe and his family departed in 1856. It made sense, as the Oder (Odra) River wended its way past the village.

Impressive from the outside, St John’s Parish Church dated back to the year 1209. Sadly, as with much of the Prussian lands, we discovered the town became a battlefield during WW2 and was left in ruins. Most of its history had literally gone. up in smoke. Upon discovering this information, ‘Click, click’ as another piece of knowledge dropped into place. If all towns had been incorporated within the battlefield this, too, would assist with the explanation of why so few of the old cemeteries and churches remained.

A country road on the way to Parszowice. Like Scinawa, this too was a township that had experienced the ravages of war.

The church (main image), damaged during WWII, is believed to date back to the fifteenth century.

On the road to Legnica.

Entering the centre of this city, it was possible for the visitor to glean an insight into what appeared to have been a once rich and prosperous township.

With the invasion of the Celts during the 5th Century BC, the region became populated by these peoples and by the 400s saw they were referred to as the Lusatians. Move on a few centuries or so, and the province the Western Slavs arrived, bringing with them the Lechitic Languages (Polish, Pomeranian, Silesian). It was now that permanent settlements were at last established.

Copper was the first of the metals mined in and around the town, but it was with the discovery of gold during Renaissance times that a massive burst in population growth took place and it has never looked02 back. To this day, Legnica has continued to be a financial and academic hub.

We found, these townships in which my paternal side of the family had once lived formed a line in length of 28.5km – or 35minute drive – from Spalona to Scinawa.