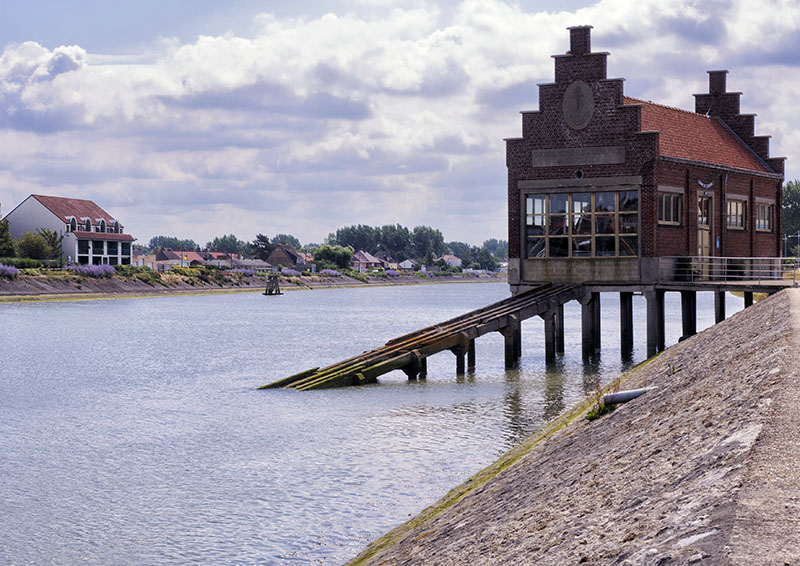 Some twenty or so kilometres north of Calais is the hidden secret of France: a town that goes by the name of Gravelines.

Bob and I would have delighted in taking Gratis upon the canal leading into the township, but sadly, the depth had become too shallow.

Set amongst sand dunes situated at the mouth of the River Aa, like Calais, this was once a tiny fishing village of poor fisher folk.

It became the site that a Count of Flanders decided would become a massive harbour providing for the businesses of the city of St Omer.

Set in a perfect topographical position for invasion, the township saw numerous battles take place. The most famous of them all, was that in which Sir Francis Drake and his fleet defeated the mighty Armada in the year of 1588.

Today, this historical township in northern France was our destination.

A bike ride through stunning countryside

where reminders of WWII could be found

in varying states of disarray.

Eventually lead us to the Aa’s inlet to the coastal township.

Today, Gravelines is unique in that most of its sixteenth century canals and star shaped fortifications remain intact.

The village was fortified as early as the 1100’s and over the centuries the structures underwent numerous updates and improvements.

It was well worth the bike ride and enabled one to gain a glimpse into what Calais would have been in its heyday.

A track led us around the base of the fortifications.

It was possible to take a path to the top on the old battlements.

Bob an I loved some of the detail found in decoration

Another plus for the town is the nearby dune landscape. Now a designated nature park with white sandy beaches just over the other side, it is the perfect place for the walker to enjoy. Whilst we didn’t undertake the walk, on the way home, Bob and I enjoyed a ride that ran alongside the dunes for some distance.