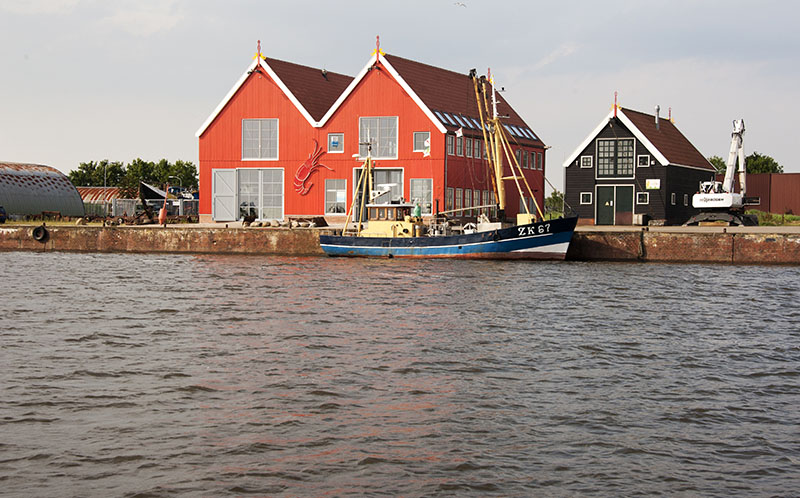 12:30pm and the time for us to depart had arrived. The kindly couple behind motored out so as to provide more room in which to manoeuvre Gratis as Bob backed her out of the marina berth.

There are times set for boats to be led convoy style through the centre of the township.

This particular run saw a working barge leading the way, until he turned off to head south soon after.

then led by one of the bridge operators, two hours were spent admiring the view and awaiting bridges to open.

Past the railway station,

and brightly decorated buildings went we.

Dinghies lay upon rafts set alongside the liveaboard barges.

Beautiful rounded towers were still in use by the bridge operators.

Through the main centre of Groningen wended we.

and we weren’t sure about the water for swimming.

At last arriving at the city limits, the Reitdiep Kanal was entered and we found ourselves in open countryside once more.

Just enough room for us and this traditional barge to pass.

past Garnwerd, where dozens of children enjoyed a swim on this warm summer’s day,

then back into open countryside

late afternoon upon us, Gratis was moored on the outskirts of the village, Zoutkamp and its brightly painted structures.

With space limited for manoeuvring and a good wind now blowing, Gratis was moored on the outer edge of the marina.

Once a seaside town, the northern salt waters stopped lapping the shoreline on the day the sea wall at Lauwersoog was completed in 1877. With the moving of the town’s fishing industry to the new coastline, its economy collapsed.

Today, however, with buildings restored and replicas of structures from times past in 2000, it’s the most exquisite of townships and new business have boosted the economy once more. Neat as a pin streets and gardens were just the start, we discovered as the three of set out past the waterfront restaurants and cafes.

If the visitor has time, it is possible to enter the Hunsingo Canal by dinghy so as to head eastward for a day’s explore. Excavated in the mid 1850’s, the waterway connects Ulrum with Zoutkamp.

Until 1836, there was no church in the village. The closest at that time was found 2.5km away in Vierhuzen which had the residents trekking there and back each Sunday. In the shape of a fish, the weather vane atop the church tower relates back to the days of the town’s fishing industry.

This replica lime kiln stands as a proud reminder to the age – old industry. Once upon a time, shells were carted from Lauwer and Wadden Seas ((today, the Lauwer Sea, is a massive fresh water lake). On arrival at the kilns, the shells were first burned, then mixed with water to create slake lime. The product was used to make mortar, plaster and more: today, the shells are used in insulation and roads.