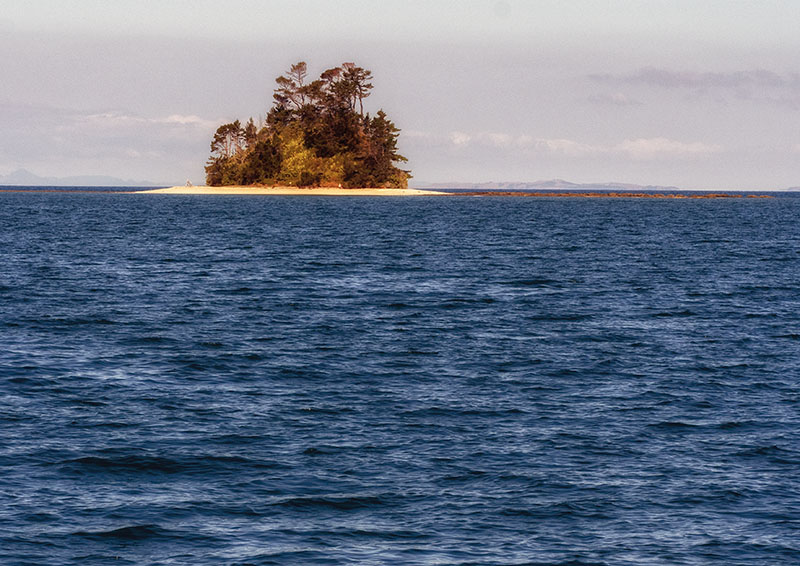 After spending a month and a half working on and preparing Saliander in Half moon Bay, the long-awaited day had at last arrived when an 1120 departure found our new beauty exiting the Half Moon Bay Marina.

Sunny skies brought with them a light variable breeze and calm flat seas as we navigated the channel and its confusing mass of channel markers. Thank goodness for the chart plotter!

Boats were out in large numbers and it was a wise idea to avoid the solidly built ferries.

In and around the region of Auckland are to be found a mass of volcanoes – some fifty or so in total! Today, they are considered to be laying dormant, with below 2% chance of erupting in recent years: like the dormant volcanoes of Australia’s southern mainland, eruptions take place aeons apart. One such feature – which holds pride of place as both the youngest and largest – on Rangitoto Island was visible from the Half Moon Bay Marina, and this day was our chance to view it unimpeded. The view from the marina side provided the full visual of the typical volcanic rim,

but the cloud wafting overhead from the opposite side created a perfect visual.

It was with interest that I read the volcano didn’t exist when the first Maoris arrived. Its birth was witnessed by the tribes residing on the nearby island of Motutapu.

A multitude of exquisite islands and bommies – volcanic in nature – dotted the massive bay, and could prove treacherous for the unaware.

The light house was so reminiscent of yesteryear.

Large seabirds resting in Saliander’s path rapidly took flight, whilst tiny Blue Penguins – Korora in Maori – continued bobbing upon the boat caused swells without a care in the world.

It was the playground delight of divers

As the day wore on, the scenery became ever more rugged and alluring.

How were the colours of the soil and rock here!

1600 hours, and our delightful first day’s motor came to an end as we entered the long, wide waterway of Bon Accord Harbour, Kawau Island. Well protected by surrounding verdant hills, a good deep channel found us venturing on and on and on, as we ventured past bay after bay, until at last Karaka Bay -Birch Bach – provided the perfect anchorage.

The rattling of the anchor chain brought Saliander to a gentle halt, followed soon after by the silencing of the engine. Ahhhhhh. Peace!

Except for the rippling sounds of the water, absolute silence greeted the ears from all directions. In today’s world of constant noise, this was an almost eerie effect, but provided one with an experience of the silence our ancestors of old would have lived in on a daily basis.

As evening descended upon us and the red orange hues of the sunset faded, for the first time since our arrival in New Zealand, twinkling stars could be seen across the heavens.

With the turning of the tide leaping fish splashed and the night birds called.

Protected from weather on all sides, what a perfect setting was this!

Now, all we had need to do was wait out the remnants of Cyclone Gretel as she made her south east march Antarctica.