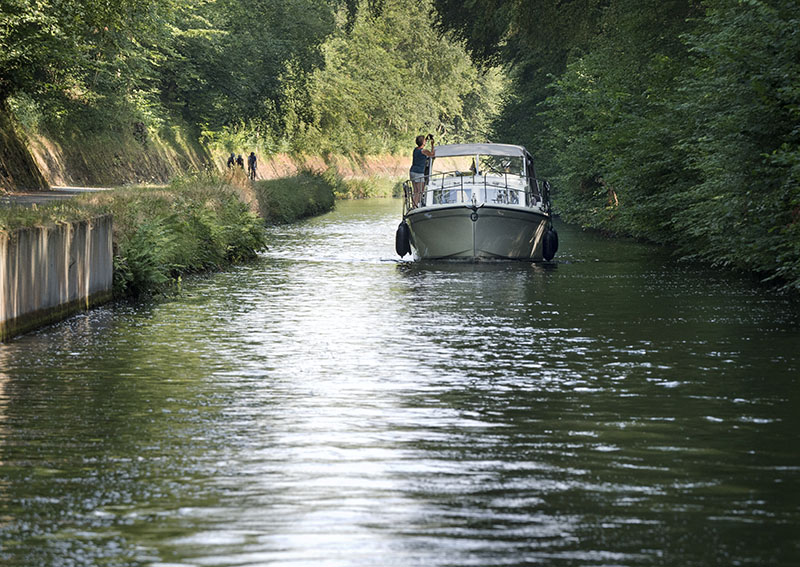 After the most peaceful of nights, the arrival of the lock operators at 8:30 it was an early start for all. With a barge joining the group, there were two teams, with us being in the second.

Between Huissignies, the water level occasionally dropped to 1.7m, but mostly stayed at 1.9m and above. We found throughout the journey that most of the shallower sections tended to be just outside the lock entrances, or at the passages between the bridge supports where the canal narrowed.

As with yesterday, there were a few locks at which cross currents and small whirlpool eddies were found (created by the water outlet pipes directed into the water below), but they were minor when compared to those found on the Midi: if one was paying attention and taking note of the water movement it didn’t create an issue.

Roosters crowing, meadows full of ripening corn and forests in which ferns thrived beneath the shade of the cooling trees were the delights of the day.

Thirteen locks in all were traversed in all this day, but they weren’t onerous.

Dining inside one of the locks whilst our travel guides disappeared into a neighbouring township for lunch proved a novel experience.

Our last day on the Blaton – Ath, having thanked our bridge/lock operators Gratis exited the final lock, and on rounding the bend ahead found the Canal Nimy – Blaton Peronnes in sight.

and continued the four and a bit kilometres to Marina ‘Darse Simon’ (approximately 26.2km mark) at Peruwelz. There was also ‘Darse du Moulin’ at roughly the 27.8km mark but this wasn’t in the best of conditions and few spaces were available.

Entertainment for the evening were the geese partaking in their afternoon bathing regime.

It was interesting to watch as the lead goose

let forth what turned out to be a signal, then departed the water’s edge to wash and remove loose feathers. One after the other, his flock followed and with another volley of honks, the tortoises were given the hurry – up order.

a further round of orders followed just prior to him departing the water’s edge to waddle up the short incline and proudly maintain guard over the area. yes, the others followed!