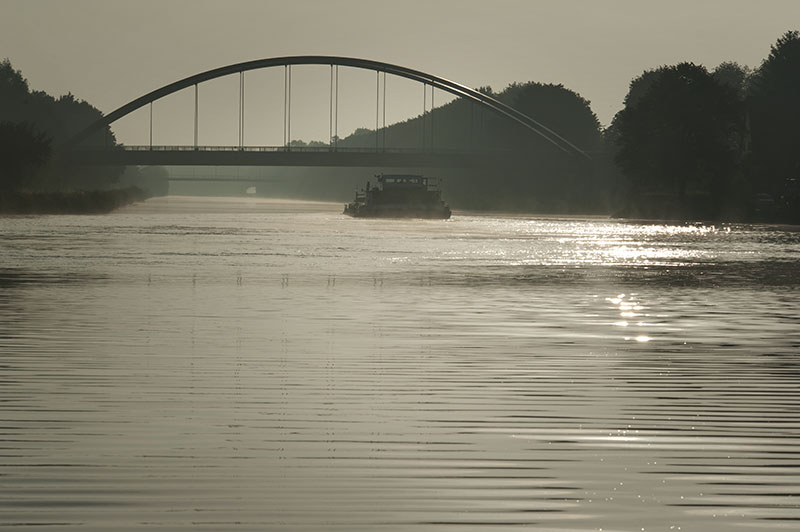 A misty morning that the rising sun soon cleared, what a delight it was motoring along in the fresh air.

How different was this, our second visit to the township of Minden. Last year cold and wet, today warm and sunny.

At the junction of the Weser and Mittelland Kanal, Minden has written history of 1200 years. Over time, archaeological excavations have dated human settlement in the township to the third century AD.

Interestingly, like the notorious Salem in the US, the fear of witchcraft was prominent in the 1600s. Over a period of 80 or so years almost 130 women were found guilty.

As with much of Germany, WWII brought with it a great deal of wretchedness. Most of the Jewish inhabitants were expelled and extradited. 1944 and 1945 saw the town bombarded by the Allies, and the banks of the Mittelland Kanal were ruptured. In fact, most of the township, bridges in the region and the aqueduct crossing the Weser were annihilated!

After stumbling across some of old timbered houses, it was with disappointment that Bob and I discovered many had been removed in the 1970’s when the town was updated and given a modern image.

In the Catholic Church, a floral arrangement in honour of Pauline von Mallinckrodt. On the death of her mother, she took over the care of her father and siblings. In conjunction with this, Pauline also spent much of her time assisting the needy. Once her father passed on, she wished to set up a nunnery. As the Prussian government would not allow religious orders run by the French to work within the state, Pauline convened her own. In August of 1849, she officially became a nun and became the first Mother Superior of the ‘Sisters of Christian Charity’.

Bob and I treated ourselves to lunch in the township. Greek this time: wow! This couple could cook!!!!

Back on Gratis, the view of our entrance point into the Weser was across the way,

whilst alongside were Mama and Babes.