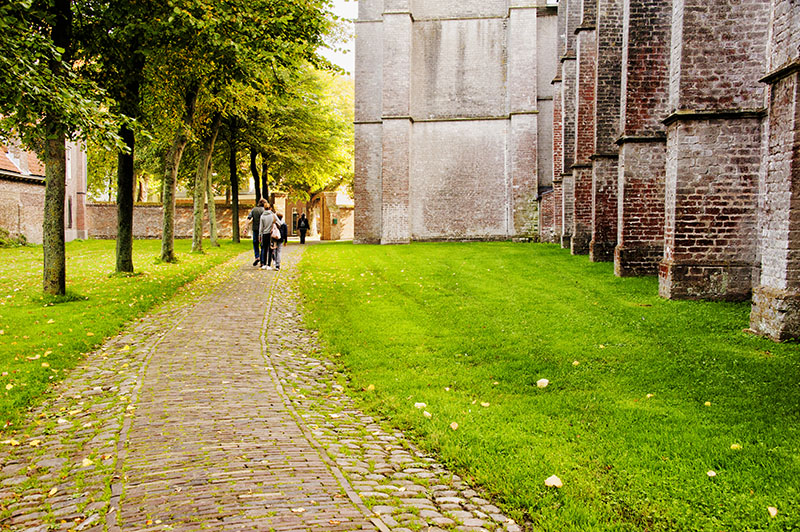 A short 3km motor south across the Veerse Meer brought us to the tiny township of Veere.

Situated on the shoreline of the Western Scheldt, the township was once a busy sea port for Scottish ships, and its old harbour now houses pleasure boats.

The history of Veere commenced in the 1200s as the small fishing village known as Kampvere.

According to the anals, a ferry and ferry house were set up on this spot in 1281 by a Wolfert Van Borsselen. The word ‘veere’ means ‘ferry’, and at the time of its inception, Wolfert named the ferry ‘camper – veer’ which literally meant ‘Ferry of Campu’. Humans being what they are, the people of the region soon called it ‘de Veer’.

During the sixteenth century Veere came to prominence when it became the main port used by the Scottish for their wool trade. During the early days, a Scottish base was established in Veere and remained there until trade concluded in 1799.

The Campveerse Toren is visible for some kilometres from the lake side. Constructed as part of the town’s defence structure, the tower was also utilised as both a light house and an inn.

The town hall with its forty – eight bell carillon is impressive. The earliest section of the structure was built during 1474.

Constructed in 1342, the late Gothic style Grote Kerk towered above the landscape. Over the passage of centuries the structure of the church grew until it eventually became what we see today. Far too large for such a small community, the church was ‘divided’ into smaller components: for example, the nave and transept became known as the ‘Great Church’, whilst other sections such as the aisle and chapels were seen as having no religious functionality.

‘The “Little Church” in the choir was split into three parts: the north aisle was rented as storage of trade goods and after 1613 the Protestant Scots had a minister and separate private prayer. The French-speaking Walloon Reformed went to church on Sunday in the Little Church. Every afternoon during the week there was an afternoon service of the Dutch Reformed Church. The Lutherans gathered in the third aisle of the Little Church.’

Burials took place in both the grounds surrounding the building and beneath the floor: in fact, a great deal of money was raised through the latter.

It was in mid – 1686 that a fire raged through the nave and the whole of the roof caved in, destroying all in its path. Reconstruction saw a much plainer dome taking the place of the former. Just under two centuries later, during 1809, the British caused major devastation to the building as they bombed the township as they attempted to defeat Napoleon.

During the years thereafter, the vacated church building was utilised as both a hospital and stables by the French military. During this period, the French removed the gravesites from both inside and out, bricked in windows and more.

From 1811, the church was left to disintegrate whilst the parishioners moved into the Little Church. It wasn’t until the late 1800s that the church received a reprieve and underwent repairs. Utilised for recitals, exhibitions and so forth, today, the structure is owned by the State.

Further renovations are taking place, so sadly it was not possible to look indoors.

A link if you wish to learn a little more about this beautiful township.

That afternoon, a bike ride took us along picturesque forested pathways: this was the beauty of the excursion for us.