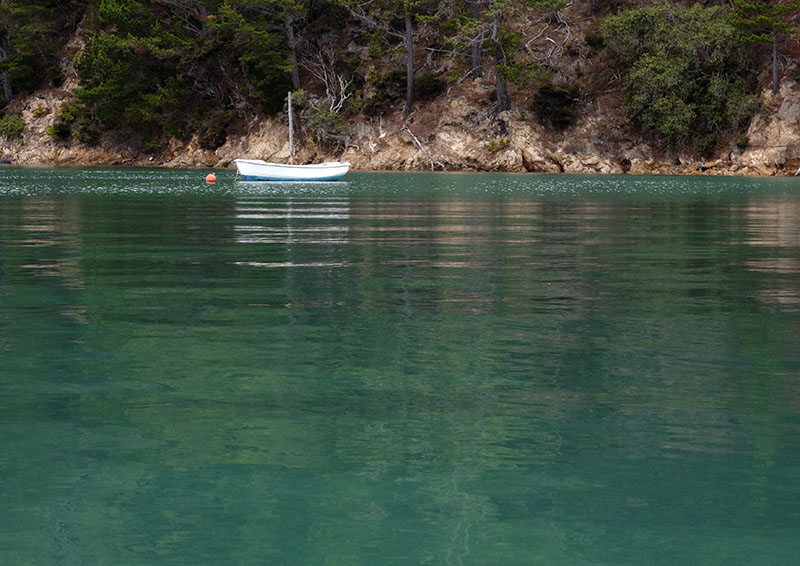 The most peaceful of nights behind us, a relaxed morning was spent in the cockpit enjoying ‘just being’.

Lunch dined upon whilst a hungry duck or two hoped for a morsel,

the dinghy was lowered and the four of us having boarded, off we motored around this idyllic waterway.

First, though, was the maust take image of Saliander at anchor.

The hues of the water brought to mind those of the Norwegian fjords and Albania’s Blue Eye at Butrint.

Variable oyster catchers (torea – pango) and pied stilts (poaka) were found wherever there was a spare perch and kept us in fits as they ran hither and thither whilst we motored past one of the jetties.

Boats of varying shapes and sizes were found throughout the bay.

The homes were just as interesting. Some even had electronic lifts on which their belongings were carried.

The setting was a perfect hideaway for those desiring isolation.

Arriving at the bay in which the old Mansion House stood, Bob steered the dinghy up to the jetty, the painter was tied and its occupants disembarked.

Arriving at the house, on turning around one discovered the full effect of the breathtaking view: the perfect spot for building a home!

To our surprise, peacocks of varying colours ambled along the pathway, pecking at the ground for some type of tasty morsel.

The island and house, we learnt, had an interesting history.

Named by the Maori for the White Throated Cormorants that making it their home, Kawau covers 5,000 acres and stands 8km long by 5km wide. Having its own micro – climate, the visitor encounters warm humid summers and the mildest of winters.

Kiwi, wood pigeons and Kingfisher were among the animals residing in this idyllic landscape.

Set in the perfect location, the Maori who made this their home, did so because from here they had the perfect view for sighting incoming vessels. The tribe initially residing here were famed for their piracy and cannibalism: so much so, that the mainland groups at last determined that enough was enough! By amalgamating forces, in the bloodiest of wars, they defeated the inhabitants of Kawau.

It was during the 1830s that, for the price of a musket or two and some gunpowder, the island was purchased by a Mr Whelan. By the commencement of the coming decade, a manganese mine had opened and the landscape forever altered.

Once a small cottage for the mine manager, it was at the behest of Governor George Grey – British soldier, explorer, governor of South Australia, New Zealand, South Africa’s Cape Colony and 11th premier of New Zealand – the home was extended, thereby becoming the mansion we saw today, and was his abode when in residence on Kawau.

A number of walking tracks were to be found here, but the shorter one we desired undertaking was sadly closed as a result of tree limbs being dangerously close to falling. In here was the possibility of sighting a brown kiwi if one crept stealthily along.

On returning to Saliander, a check on the weather forecast showed that early morning would see the cyclone’s outer edges passing us by, but predicted winds were already reducing. One more day to be spent in this idyllic bay, then it would be time to move on.