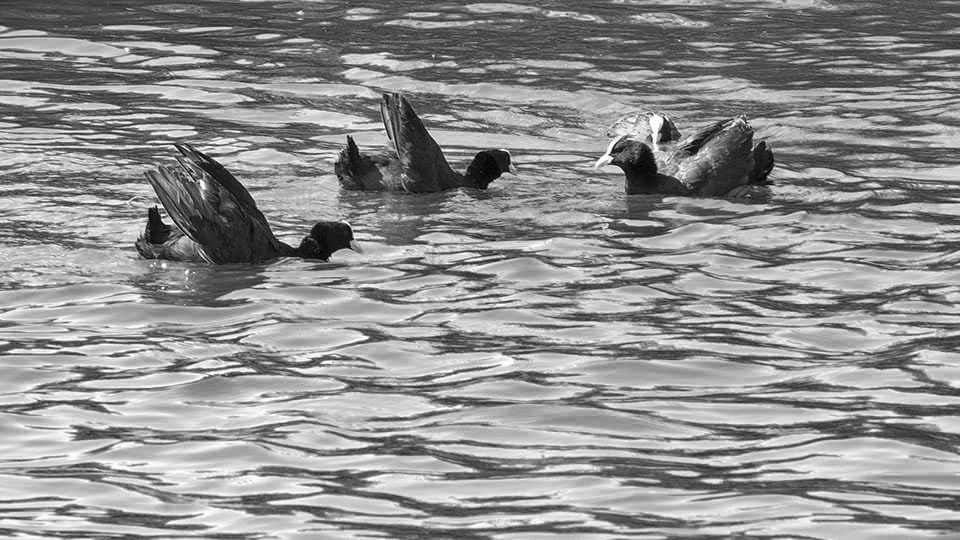 Exiting KGWV, one heads straight across the Ring Route Canal and immediately enters a very different Leie to that found leading from Deinze to Kortrijk.

This is a meandering river that wends its way in twists and turns across the countryside for some 20km. Interspersed with small villages, farmland and tiny forests, for its contrast, this is a route not to be missed.

Constant birdsong chirruped Gratis along her way, whilst with trepidation, a lone stork eyed us until long past: where’s the photo you ask? Well good ol’ Murph came into play: I was at the helm, of course!!!

pristine homes with summer items ready to go, whilst remote control lawn mowers did their work,

and fields of corn contrasted against the ‘natural’ landscape with its reed lined shores upon which Canadian Geese grazed and watched, whilst coots noisily bickered

in a flood of white wash.

Adding colour to the scenery were the occasional waterlily pads upon which stalks were a – topped with splashes of pinks and white.

Depths on this watercourse ranged from 1.8 to 4.2 metres, depending upon where one was in relation to the bends.

Two bridges, the first at an old lock measuring just 5m in width – vhf 20 – slowed one down a fraction, but it was all part of the beauty. It was between the two bridges that smaller commercial barges came through.

At Deinze, a beautiful town mooring provided plenty of room for the visitor: no power or water, but for the self – sufficient cruiser that wouldn’t be an issue.

At the intersection with the Leie – Afleidinskanaal: Deinze – Schipdonk, we turned right and followed last year’s track up to the Schipdonk Lock where we spent the night. A spring line was required to ensure the boat was less affected by the currents created by the large commercials in passing – a good 5 knots went rushing through, first one way then the other.

According to the book, the Leie – Afleidinskanaal: Schipdonk to Eeklo should be 2.8m and the branch into Eeklo 1.6m in depth. A peaceful walk along the canal enabled us a good look further up. In this waterway, fish grew a good half metre in length. Grasses grew thickly on the edges of the canal, meaning its actual width was reduced and even in the they were to be found: this had us querying the actual depth of the waterway today, and erring on the side of caution, we made the decision to forego journeying upon this canal.

Designed for automatic speech control, unfortunately it didn’t work on ours. Since technology and I don’t do well together, Bob has a bit of reading to do!