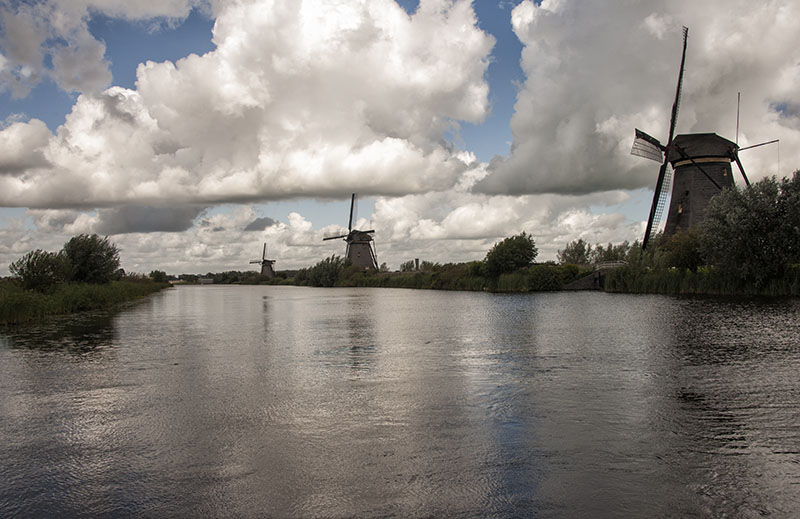 This UNESCO World Heritage site is a ‘must see’ for anyone who visits South Holland.

Catching water Ferry 202 just west of the Erasmusbrug, off Bob and I went. Depending on the time of day the ferry may drop you off right on the doorstep, otherwise the visitor hops off at Ridderkerk and alights the tug that then ferries you the short distance across to Kinderdijk.

Once off the tug, a short walk up the dike, then down, takes you along the path leading to the ticket office.

As the landscape expands before you, the first line of windmills comes in sight. The further you continue, the more one sights. No powerlines mar the view: it is pure polder landscape as stood in centuries past.

Kinderdijk is unique, in that it is the sole remaining region in the world where windmills – 19 in all – are clustered together in such numbers. As with much of the Netherlands, this region lies below sea level, and the sole purpose of these mills was that of drainage. Kinderdijk consists of the mills, pumping stations, storage basins, trenches and drains: a marvel of ingenuity when you think of the time at which it was installed.

This system of drainage is called ‘stepped drainage’. Stepped drainage is used when the volume of water requiring drainage is too great for a single windmill to manage. The windmills are placed in a line (as in the Overwaard area of Kinderdijk), with each placed slightly lower than the first.

The year 1868 saw the introduction of two steam powered pumping stations to support the windmill system. Today, diesel pumping stations have replaced the electrical system that was put in place during 1924.

The region is consists of two sections; the Overwaard and the Nederwaard. Whereas the mills of the Overwaard are placed in a regimented line like soldiers,

those of the latter are seemingly placed higgledy – piggledy so as not to steal the wind from the others sails.

There are walking paths for ambling upon, however with heavy rains threatening, Bob and I chose the second option of touring by boat. To gain the full effect, this really is a must!

This is a hollow Post Mill, designed for drainage. The original form of this was the post mill, which was used for milling corn and has been in existence since the 1200s.

We even saw people servicing one of the mills.

The excerpts scanned from the small booklet we purchased are well worth a read.

Excerpts from the Kinderdijk Leaflet

History of the Windmill Worldwide