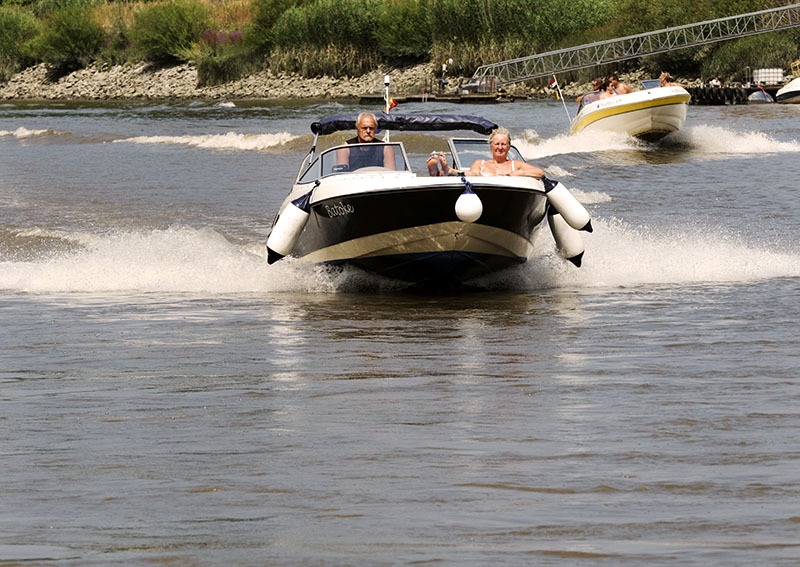 After much searching last night, with the help of the barge association website, Bob finally found the tide times page for the Bovenschelde. From there, in tandem with the small table in our Belgian Waterway book, it was possible to calculate high tide at the Winton Lock.

Requiring the high tide to experience an easy trip up the Bovenschelde, with only a short 7kms to the lock, it was a slow start to the day since the peak wouldn’t take place until 13:00.

If one has a choice, the Winton Lock is the far better option to that smaller much older one at Klein Willebroek.

On our way, the industrial landscape soon behind us, green thickets of bush lined both banks of the meandering brown river making for the most pleasant of afternoons.

Over the ensuing hours, with a pace of around 3km/hr – the river that was – Gratis sat at a speed of around 13.5km/hr, and we both found it to be a much pleasanter experience than that upon the Garonne in 2015.

(As one moves further inland upon a tidal river, the pace of the water slows. Had we been in Antwerp which is close to the river’s mouth, the speed of the water would have been significantly faster. In addition, the time of the tide has to be considered. The first and last hours of the six hour cycle are the slowest, whilst the third and fourth are the fastest.)

Late afternoon upon us, having made the decision not to tie up on a river mooring, we passed through the Dendermonde Lock into the peaceful Dender Canal. An exquisitely beautiful waterway, we decided it is a must to do. A short two kilometres further on, Gratis was moored at the pontoon provided for passing cruisers and readied for the evening. This will be our port of stay for the coming days.