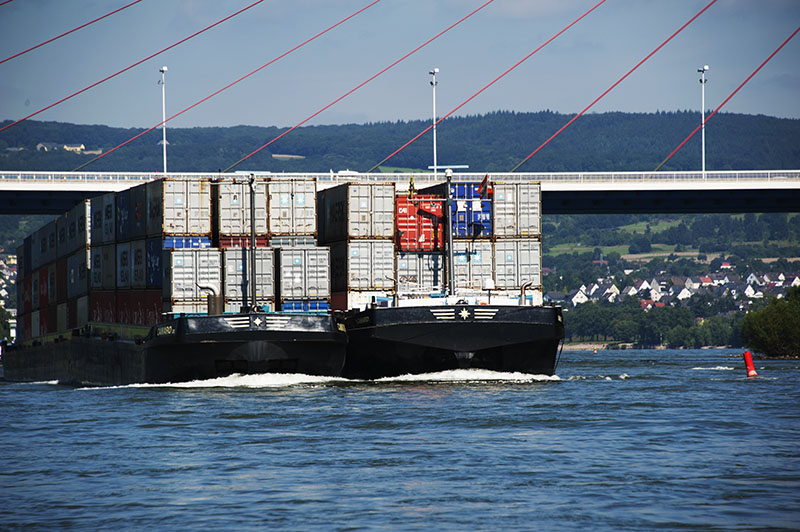 Awaking to find a thin fog drifting upon the surface river,

Bob and I relaxed with a warming mug of coffee each.

A small breeze at last set in, and off we set.

Only a few short kilometres took us to the lock that would conclude our Mosel journey and see the commencement of the Rhein.

With the Rhein easily flowing at 7km/hr, we were hitting tens plus with Big Bertha running in idle. The Rhein is a major waterway for barges, and we soon lost count. Between barges, holiday cruising monoliths and speed boats racing at high speed, this proved an interesting day’s travel in Big G.

With bow waves created by those barges heading upstream, and the wake created by the speed boats, it was like being in a washing machine back on the Indian Ocean.

That aside, it was an experience not to be missed!!

It was also important to watch the barges. Many were too large to manoeuvre the bends as we did, and had need to remain on the incorrect side. A blue sign up next to their cabin was the one to look for, and to crisscross the Rhein as required. On the three image above, it is possible to make out the blue squares.

As with the Mosel, it was not possible to moor anywhere: honestly, the berths were few and far between. With not a great deal to stop for, we made the decision to continue as far as possible.

a vineyard or two,

and plenty of castles.

At last, Hitdorf marina. Here there were geese drinking at the water’s edge and feeding upon the grasses on the riverbank.

At one stage a rat came forth to feed, and all went still. Those geese didn’t take their eyes off the critter.