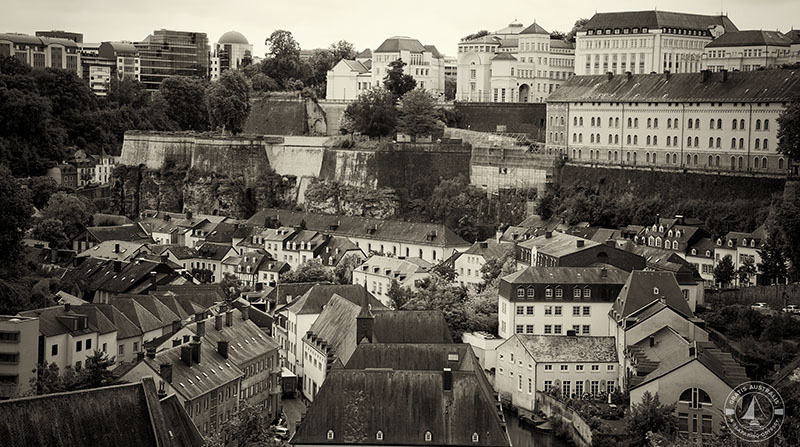 Situated upon peaks that soar seventy metres above the Alzette and Pétrusse Rivers, the city of Luxembourg is linked to the rest of the world by numerous bridges and viaducts.
Wandering the town, we were amazed by the intricacy of the town’s layout. Constructed on multiple levels, that range from the mountain peak into the gorges far below, it is a town best explored by foot.

The Romans left their touch on the landscape here too, for it was the perfect spot for military operations, with the first true fortifications constructed in around the 900’s. Between the mid fourteen and fifteen hundreds the town’s battlements were increasingly strengthened, but it was in the following century that they reached their crowning glory. Under Spanish rule at the time, the tunnels (casemates) – in excess of 24km in length and covering 4 hectares, were constructed: perfect for defeating the invader, except when under siege! Sadly much of this structure was dismantled as a result of the 1867 ‘Treaty of London. Over the centuries, Luxembourg City has been ruled by the French, Prussians, Burgundians, Spanish, Austrians, and Dutch. Fort Thüngen and its tunnel were for us, the most interesting part of the day.

In Bavaria it was lions, Berlin bears, and here elephants…

St Michael’s Church, consecrated in 987 was built near an old Roman road junction. It was here that a market place was developed and the city grew out from that.

We enjoyed the detail in the fountain – the Musicians of Bremen????

Overly neat and tidy, it wasn’t the place for us.