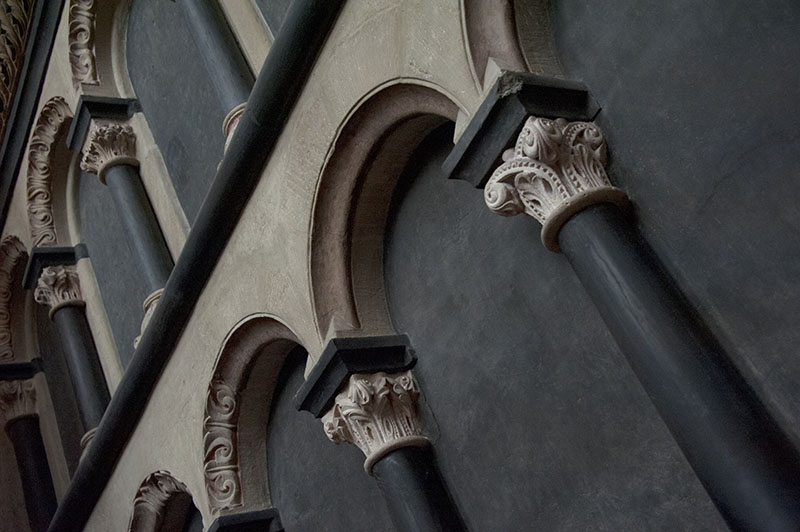 This was the day we drove to Trier, a town with no less than nine UNESCO world heritage sites. Tourist beware, this is a place that requires more than four hours’ duration for exploration. We intend to return.

In short, the town was settled by the Celts in 4BC and named Treuorum: it is believed to be the oldest German city. Along came the Romans in the last part of the first century BC. As happens in most invasion, the town’s name was modified in fitting with the Roman rule. Over the centuries, the name altered a few more times, until finally becoming ‘Trier’.

There is an interesting legend that says Trier was founded by a prince of Assyria, and that it was he who the name was originally named. On the portico of the Red House in the market square there is an inscription:

Unfortunately, this was written in the twelfth century, so we will never really know!

Today, this is a town renowned for its architecture. To do full justice I really required my tilt shift lens, so chose to leave the majority of outside achitectural photos until our next visit.

Two of the most magnificent were undoubtedly the Trier Dom (St Peter Cathedral) and Liebfrauenkirche. The first, sections of which are dated to 300AD latter is oldest, whilst the latter is the first Gothic church constructed in Germany, and one of the many sites within Trier designated UNESCO World heritage.

A diagram of the building layout and the years in which the varying areas were constructed.

It’s incredible how many materials the ‘Stations of the Cross’ are created from. Almost every church has something different.

The detail, even in lists created.

Contrast of colours worked so well.

A view down the aisle.

The number of hours that went into the craftmanship would be mindboggling!

Within the Cathedral, the Baroque stucco work was out of this world!!!!

Yhey had their own distillery.

In the burial chamber.

It’s amazing length of time some items can survive.

In the treasury, gold and silver work.

View from high up.

The Roman Imperial Throne Room (Konstantin – Basilika): Image 4887 Amazing! The largest one room structure from the Roman era. Plain, its sheers size of 27m width, 67m length and 33m height is what truly awes the visitor.

Today, the structure is still in use by the Protestant church.

What an interesting roof design.

Porta Nigra, a gate built in 180AD by the Romans was most impressive (no Pic I’m sorry. Just couldn’t do it justice with the lens I had). What was incredible was the method of construction: with saws of bronze that were driven by mill wheels.

Bob and I came across another interesting sight on the drive home: how to trim the grape vines when on a slope.

Another tidbit for those who are interested: this was the birth place of Karl Marx in 1818.

Info about Trier for the visitor