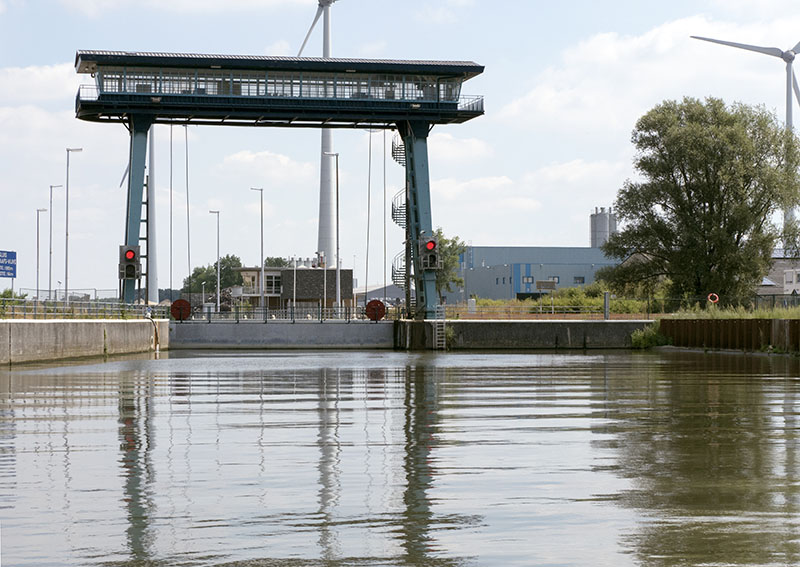 The morning found us back on the Leie, pointing the bow of Gratis Gent way for a few kilometres.

With the prop requiring its new anode sooner rather than later, we were having to pick up a little pace.

Two locks with drops of under three metres were the only stops along the way, were the only breaks in what was a long but pleasurable day where few towns were encountered and in which almost 60km was covered.

A great deal of work was underway on updating the facilities, banks and locks on the Leie, with one brand new spanking lock that accommodates the pleasure boats to perfection already in action.

This trip was purely about taking pleasure in the landscape.

Arriving at Deinze, Gratis was propelled from the Leie onto the Afleudingskanal Van de Leie, a 14km short cut that would bypass Gent and lead us straight to the Kanaal Gent – Oostende, and so onto Nieuwport.

The main excitement – not – for the day was being washed upon the rocky bank by one of the large multi tourist pleasure apartments – also known as cruise liners – who badly misjudged whilst making haste.

Having rounded a curve in the waterway, ahead of us in lovely single file were approaching two large barges.

To our utter amazement, with both an unviable distance for passing and a canal width not suitable for two large craft and sailing yacht simultaneously, the rear vessel (the cruise liner) suddenly pulled out from behind the commercial barge in preparation for passing. After what appeared to be an eternity, but was in actuality only a minute or two, Bob and I came to the realisation that he may not make the pass without colliding with Gratis. The operator of the commercial must have thought the same as he  slackened off speed to practically nil, as did we.

With Gratis placed as close as viably possible along the bank, we watched on apprehensively as the vessels approached: rocks and we knew not what, aligned the shoreline beneath us and there was no safe way that we could disembark should that be the action required.

Rather than slow and back off, the captain appeared to further gun the engines and pushed onward, all the while the distance rapidly shortening.

Gratis was now at a standstill……………. not a safe situation at all, since no engine power meant no control should it be required at a moment’s notice.

One may say, why not undertake a U – turn?

With the speed at which these commercial vessels traverse the waterways, and Gratis being a 20 tonne yacht with an old fashioned keel, even our 85 horse power Big Bertha couldn’t manage the manoeuvre in the time span required.

It was only when one hundred or so metres from our girl that the overpassing barge came fully level with the other, and could finally consider commencing the move across to his side of the waterway.

With the closing in of the barge, the suction of the water created by his bow commenced drawing Gratis forward……….

There was nowhere for Bob to steer, as the barge partially turned to starboard (his that is), directed at a slight tangent to head back across to her side of waterway. In the process, the captain both cut in front of the commercial barge and significantly narrowed our section of waterway, as the stern came just metres from the shore. At the bow (looking back, the action of a nincompoop) I could have literally touched his stern as he passed.

We were squeezed between a mountain and a molehill.

It was at this point that the bow wave, along with the whirlpools and eddies within the water that were created by his manoeuvre, upped and lifted Gratis the few slight feet required to place her upon the rocks.

You can imagine how irate was Bob, whilst the hull bumped and scraped that canal bottom, and it appeared our girl was going to be left high and dry (we feared the damage done below).

Onto the radio went he, only to hear that heedless captain audaciously say Bob should have stopped sooner, as he went racing on his way.

Well, there we were high and dry, with the cause of our predicament now a speck in the distance.

The second of the barges had slowed, to almost a standstill, but we proved to be most fortunate as the combination of wash created by both the barges lifted and pulled our girl out into the centre once more.

As Gratis moved, Bob thrust Bertha into motion, all the while hearing the bottom scrape, along with pings and dings as the prop commenced rotating once more that didn’t bode well at all (we would later find damage that totalled in excess of $8,000 euros).  Making use of the currents, a 360 was undertaken, and our girl finally set in the right direction.

Where were the water police when you needed them????

The excitement behind us on we continued, at last arriving at the Kanaal Gent – Oostende.

To our surprise, the countryside became even more exquisite as thick forest lined the banks and the putrid smell of methane gas alerted us to the farmland hid behind.

It was a waterway enjoyed by holiday makers in all forms…. and animals in all forms enjoyed life.

Even here, the banks were eroding.

Arriving at Beernem, we were given a warm welcome by the harbour master and decided it was the perfect place to spend a few days.