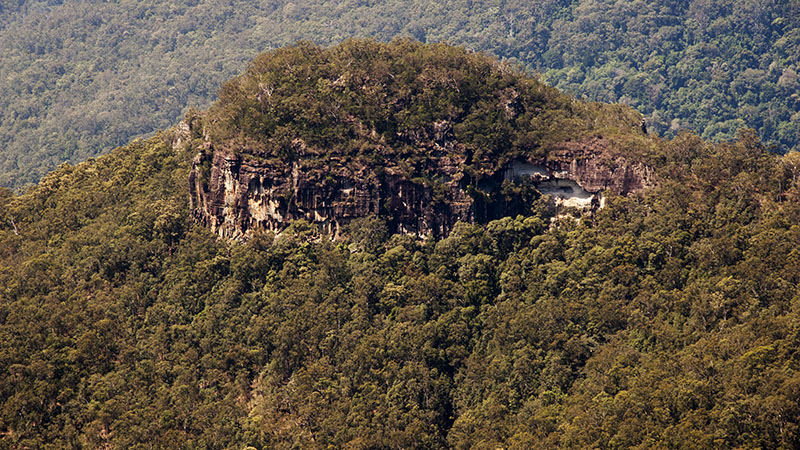 The last of our visits to the eastern side of Lamington National Park took place today, and it didn’t disappoint. Yet another contrasting landscape greeted us as we traversed the winding narrow road up the mountain side.

At Rosins Lookout, a far distant Mount Warner that had once loomed over Lamington and the valley far below us was a faint shadow in the background.

On arrival, Bob and I enjoyed partook in one of the many walks available. Disappointingly, our preferred choice to the caves was undergoing repairs after last summer’s cyclone Debbie, and closed. That left option two, the Bellbird Circuit. Twelve kilometres in all, we undertook a shorter version that took us to the Bellbird and Koolanbilba Lookouts.

First, a shoe wash at the base, set up by Parks and Wildlife: the aim, to prevent disease permeating the bushland.

Bird calls replaced the eerie silence we have been so used to as: the cat bird meowed, bell birds tingled, parrots screeched, the whip bird whipped, and brush turkeys scratched: then there were the numerous others we were unable to identify!

Dense thick forest, in which a wide variety of trees, shrubs and low undergrowth existed: a glimpse into what Tamborine Mountain would have been prior to the logging era.

A narrow winding pathway covered in roots and dust brown leaf litter led us gently down and around the eastern mountain slope.

Trees proved to be tall here. This beauty had to have been a minimum of one millennium, but we believe it is much older.

This gives you a true idea of its size.

A few trees had massive knobbles where branches had once grown. They heal quickly here.

An occasional flower in early bloom added colour in the dim light.

Lichen and moss decorated trees, both young and old.

A Mamma and her youngster entertained us as they enjoyed a play in the shadows .

Never before, had Bob and I had the privilege of sighting so many in an environment of this ilk.

A little further on, yet another!

Some time later, Bob and I emerged onto a more open escarpment from which one viewed the most beautiful vistas below.

Every so often, the path further narrowed, where a landslide had been set in motion, causing rocks to tumble over the sharp cliff edge into the valley far below.

At times, the ground became damp and moist, a sign of the waters that race down these hillsides, creating cascading waterfalls in a flooding rain: one wouldn’t want to take a misstep!

The highlight was the waterfall that trickled over its pathway of stone. A part of our walking trail, there was time for Bob and I to sit in air cooled by the waters and enjoy the view.

At last, the vista at Koolanbilba Lookout spread out before us.