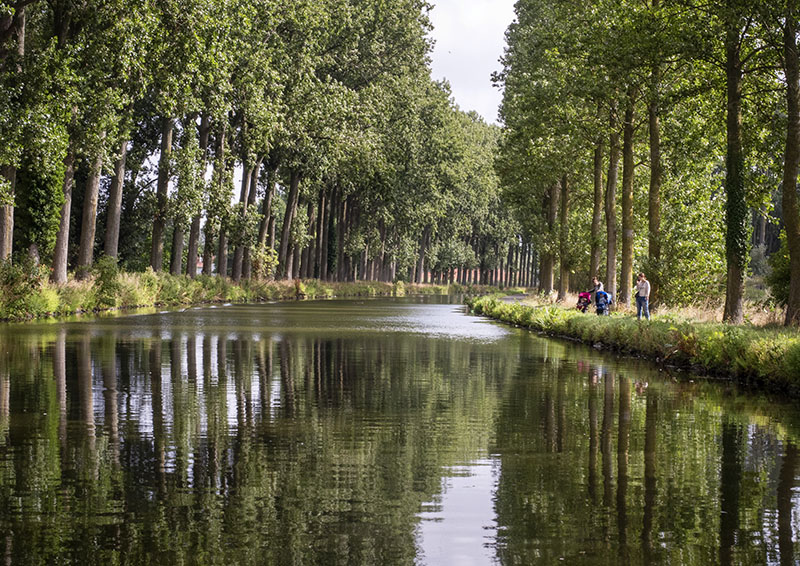 A midmorning start, this was our last day on the Roubaix – L’Espierres – Spierekanaal.

It almost defied belief, but the landscape became increasingly more beautiful: strongly reminiscent of the Midi with its towering avenues of trees that lined the canal sides. Two more sets of moorings at kilometres five and eight were right in the centre of farming country where church spires peeked through the bushes. Whickering horses, honking geese, the pungent aroma of drying hay floating on the breeze, it was all there to be experienced. For me, it was the perfect setting where one could moor for a few days and head off on either foot or bicycle, but not to be this time. Three locks, three bridges and 9.5km took us two hours to complete. As with the French section of the waterway, the water depths fluctuated and like always, the lowest sectors were found at the lock gates and bridges, but in most instances it was just a few seconds then gone.

It was on exiting Warcoing lock that our nemesis arrived. The water outflow exit right at the lock entrance/exit only hindered issues by bringing with it more silt.

Seconds out, the stern rapidly grounded! 1.3m was the reading on the depth sounder. Increasing the revs on Big Bertha, Big G was barely making headway resultant of the prop now being set partially within the mud. The stern having little effect, Bob returned the throttle to neutral and waved to the lock keeper who was watching. There wasn’t much the poor guy could do, but Bob was able to inform him of the actual depth.

Gratis still, the stern freed a little, and Bob set our girl in slow motion once more. Over the next five hundred metres, inch by slow inch, like a creeping caterpillar, Gratis channelled her way through the suction of oozing mud before at last finding herself floating free of its long ranging tentacles.

What was ironic, however, was the dredging machinery moored on the upstream side of the lock: and the workers were on holiday. Methinks it won’t take long for them to be at work below the lock on their return!

A further three and a half kilometres (where the water level remained at around 1.6m until passing the final bridge) found us passing through what was once a working lock, where today overhanging bushes and trees create the most picturesque of effects when approaching, and is now an open thoroughfare with plenty of depth beneath.

At midday, this wasn’t the end of the day’s travels for us. The thought had been to overnight in Tornai, but a great deal of work is underway on the canal in that sector. It appears that the mooring area is being enlarged to the size of a small marina, and although it seemed that the current moorings could still be used, we weren’t certain so made the decision to continue.

Just prior to Neptune, is a fuel barge – complete with marine shop – where pleasure boats can top up and a few metres further on a small mooring area – no facilities available. A quick stop here in order to purchase a new fender, then a perusal of the maps.

Only fifteen kilometres to Peruwelz where we planned to spend a few days exploring the countryside. On paper, with two locks ahead, this should take say an hour and a half, maybe two. 4pm, this should be a breeze, so on her way went Gratis.

Good ol Murph was up to his tricks again. Four kilometres down the track were the two locks. Unlike our previous visit where traversing the structures was a dream, this time long waits at both locks meant the hour was passing half past six by the time Gratis exited the last and a further thirty minutes of travel found us at Peruwelz, our base for the coming days. A late finish, but it was worth it!

Despite the depth issues, Bob and I thoroughly enjoyed our few days on this shortest of waterways and would highly recommend it. If enough cruisers show an interest in traversing it, hopefully the authorities will work on re- dredging the problem areas and install some good facilities at the main mooring basin.