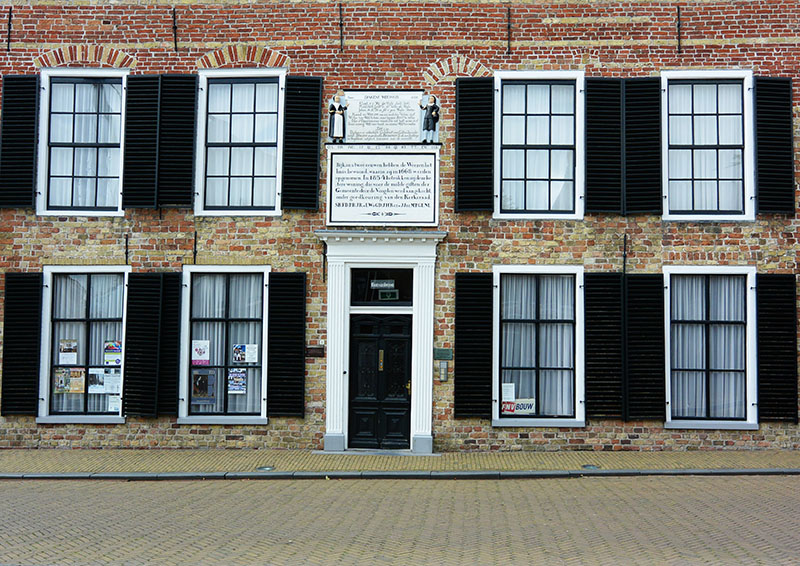 Amidst heavy rain showers, squalls and wind Bob and I motored the short distance to Franeker, which is situated half – way between Leeuwarden and Harlingen on the Van Harinxmakanaal.

Moored in a quiet channel on the doorstep of the township’s centre, Bob and his knees couldn’t have wanted for more.

The highlight today was visiting the Eise Eisinga Planetarium, which has the privilege of being the oldest working model in the world.

On walking through the entrance, this exquisite time peace greeted the visitor.

An excerpt on its history was placed alongside.

Moving closer, it was possible to study the minute detail on each section.

Eisinga, the genius behind this marvellous accurate to scale model of the solar system – as he knew it then, was by trade a wool carder. As a youngster, he had learned the intricacies of the mathematics of the time and it was with this knowledge that he was able to put these skills to use. The aim? To show how the solar system actually works, in order to prove to the populace of the time that the world would not come to an end as three planets passed ‘close’ by.

Incredibly, this intricate work of art continues to accurately display the movement of the planets to this very day.

that drives the model from numerous hoops and circular discs created from wood: 10,000 handmade nails were used to make the teeth required.

In addition, he also made other clocks that tell the day, date, rising/setting of the sun/moon, and position of the stars above the town.

Nine weights, a pendulum and someone to reset the weights at the appropriate times have kept this massive system going for the past two hundred or so years.

the personally presented explanation of how the planetarium worked – in the language required,

videos and hands on interaction,

Bob and I were most impressed!

Outside once more, we discovered another must is to visit was the Martini church Franeker.

On walking in, the visitor was asked to place a pin /pins on the pin – up board/s to show from which part of the gobe they came.

This was for Europe alone.

Then Bob inserted ours.

Dedicated to St Martin of Tours, a church of some kind or another has stood in this position since at least 1000AD. The church of today, was constructed during the early 1400s. Surprisingly plain and spacious, art work and other items adorned the walls,

whilst upon the floor more than 300 tombstones were to be found.

PDF by the church congregation about its history.

During the 16th Century the Mennonites were persecuted severely. It was in Franeker, that the religion found some reprieve and felt relatively safe. Today’s church stands behind this gate

in the garden of the house that was donated to the group in 1899.

and yes, the food was scrumptious.

There was so much of interest for one to view in this smallest of villages:

the history found upon the walls…..

and the council offices

in which a wedding was taking place were just a few.

We really enjoyed our wander through this small but interesting village, and recommend it be placed on the list.