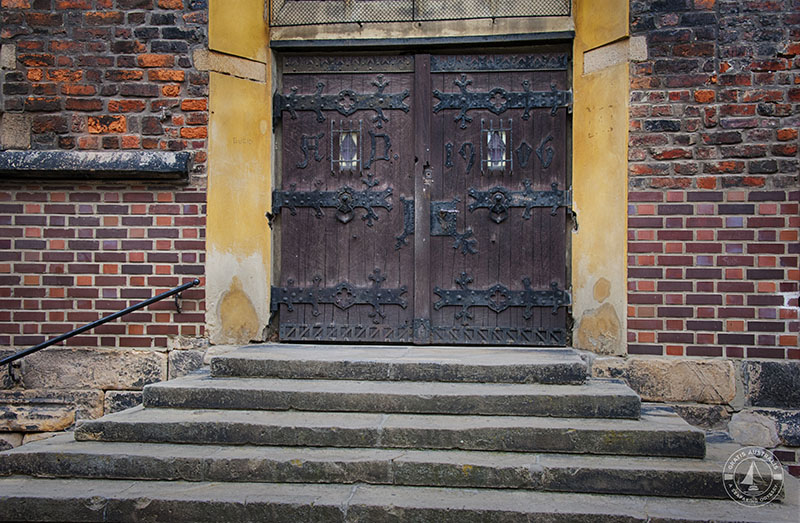 This was the day we took to explore what remained of the old town of Legnica.

Driving along the road entering the city, one espied first a massive modern cemetery, then just past it a much older one left dilapidated and covered in thick jungle.

Today, Bob and I had a closer look. It turned out the forefront was Jewish

The gates locked, it wasn’t possible to explore within, so along the aged wall we wandered.

At the rear was yet another cemetery, where the headstones had no ‘Star if David’ and German names. We assumed this may have what was left of a Lutheran graveyard.

Back into the centre of Legnica we drove. There were some beautiful buildings here.

The etchings on this particular shop were so detailed one could have studied it in detail for a month of Sundays, and still not have discovered all.

We loved the charm of the town.

The pillar in the modern shopping gallery was impressive!

Ambling through the streets, Bob and I stumbled across the impressive structure of Piast Castle.

During the twelfth century, this was one of the first brick fortresses constructed in Poland and replaced the original wood structure. Commencing as separate buildings, the passing of time saw them gradually become one. The period of the fifteenth and sixteenth centuries saw the outer wall with its bastions added to encircle the complex.

Major works that took place during 1743, had the castle fortifications, bridge and moat dismantled, but it was during WWII that the final blow came, as the castle was obliterated during the bombing of 1945.

Thankfully for today’s tourist, seventy percent of the structure was rebuilt during the decade of the 1960’s.

The Cathedral of Saints Peter and Paul overshadows the market square in the centre of town.

The Protestant church here, we discovered has been in continual use since 1200s.