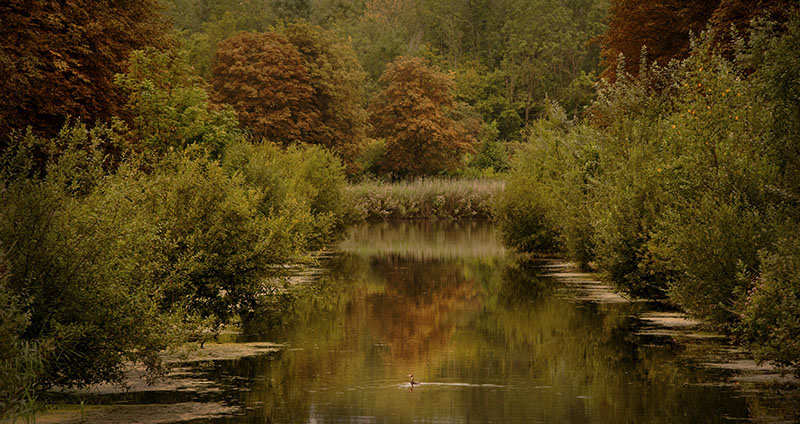 In a combination of cycle and train journey, Bob and I travelled to the modern township of Lelystad.

An unexpected tour through the exquisite Zuigerplas, with its creeks, lake and multitude of wood and heath areas. This was a large parkland and pond area that was created from the sand extracted when the dyke that now protects this region from the Ijsselmeer was built.

Named after Cornelius Lely, the man who pioneered the plan for the closure of the Zuiderzee, the section of land that the township of Lelystad now stands upon, was the sandy bottom of the South Sea until the construction of the dike less than a century ago.

Batavia Werf was where we found the replica of the Batavia – of such infamous fame – that was wrecked on the shores of the Abrolhos Islands just off of the Western Australian coast.

The yard in which the replica was constructed was still there, and a second ship partially constructed. Sadly, with the advent of the last economic crash, funding for the project came to an abrupt end.

Entering the Nieuwland: Museum, Archive and Study Centre, was the first time Bob and I found ourselves most disappointed by the presentation.

That aside, we did learn about the early peoples who resided in the Flevoland region during the New Stone age period some 5,000 to 3400BC. Called the Swifterbant Culture, they were a group of hunter – gatherers who also farmed. It was only with the draining of the Zuider Zee that this culture was uncovered.

The Bounty: was it that of the famed Captain Bligh?

”Bounty was renamed in 2004 as a beautiful two-mast brigantine in the state in which it is still in progress. Originally, this fisherman was built in 1954 at the Concordia site in Amsterdam and then served on the North Sea until 1965.The ship was then located in Zeebrugge (Belgium) under the name of Z851 Uranus.”

Upon the opposite shoreline, an interesting sculpture.

Some interesting reads and the map of Lelystad: