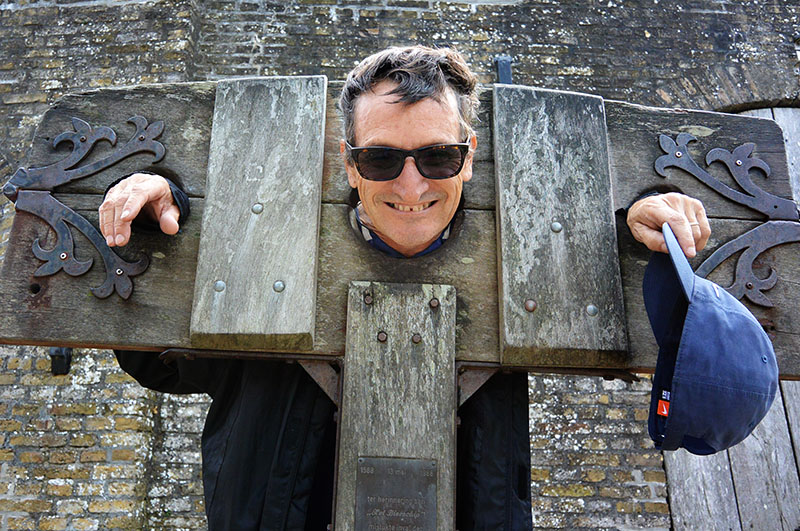 For a change, we were blessed with a warm sunny day as Gratis motored us upon the canals and lakes.

First, a walk through Lemmer, which proved to be a pleasant holiday town, then off Bob and I went.

A short ten or so kilometres later, Sloten with its old stone arched gateway and working windmill beckoned, so mooring Big G, in we ambled.

What a delightful, picturesque village this was. An old walled town, the residents maintained it in pristine condition.

The canal ran through the centre of town.

We wondered whether the cow within this arched doorway signified the residence of what was once a dairy.

The hive and bustle was in the centre of town at the café and restaurants, where the populace and visitors gathered, gossiped and dined.

Meandering along a raised mound we entered a large green in which children played and mothers gathered. Here we discovered a series of clotheslines, one of which happened to be in use.

It was an exquisite setting.

Along the way, Bob and I happened along a map of the township, which gave us more of an idea of the layout. From our travels, it appears the initial section of the towns in this region gre first along both sides of the canal, then spread out from there.

The windmill is still in use today.

The view of the town from the bridge: Bob was looking at the windmill.

Down a set of stairs and we came across the old stocks. We both had a go: you wouldn’t have wanted to be a shorty!

The view behind and to the front of the stocks.

A number of homes had signs that denoted the occupations of the residents.

We liked this one in particular.

In the Protestant church, Bob and I discovered a 3D image of the town as it was during its years of fortification. How different to what we imagined. The walls turned out to be a dike, with only the entrances created from stone.

Past the outskirts of Woudsend, which also appeared to be an interesting stop!

On board our girl once more, another dozen kilometres or so on and our destination of Heeg was attained. Like Lemmer, this small village was a beautifully kept holiday town and had a real vibe. The marinas were practically full, but we managed to find a quiet spot on the outskirts of the township.

It was here that we at last found the miniature version of the Skudje and where it was possible to hire one. Sadly, the weather didn’t play ball, so the decision was made to spend the day travelling instead. Hopefully Bob will have his chance to sail one some time soon.

A visit to the tourist information centre provided Bob with the information for which he had been searching: where to hire a miniature version of the skutsje (each size goes by a different name) that he could take out for a sail.