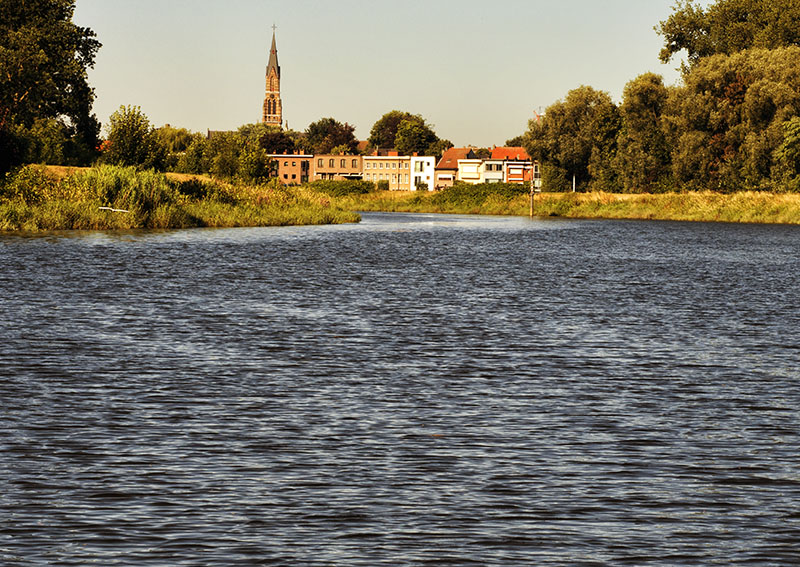 Another 20km day of travel took us through the Duffel Lock and onto the tidal Beneden Nete.

The lock at Duffel had more than enough bollards evenly spaced within the walls and presented no problems as the water level lowered.

Another friendly lock operator informed us of bridge heights and wished us the best of journeys.

Upon the river, green countryside, banks encased in cloaks of rushes and a gentle flow as the tide receded, assisting Gratis along in its wake.

As with all the tidal rivers we have experienced during our European travels, this is another that experiences good sized fluctuations, so it advisable to take note of times to ensure entrance to the locks is possible.

To enter the Zeekanaal Brussel Schelde we entered the Klein Willebroek Lock. An old  curving structure, it was the best set up for Gratis, but she managed.

Despite not being set up for visitors, and the available mooring spaces not large enough for our girl, the citizens in this small town went out of their way to accommodate us.

Early on during both the major wars, the Germans realised that it was a strategic must to take over and control France.

From the view point of the Kaiser in WWI, it was to prevent France from supporting the Russians, whilst for Hitler, it was a direct retaliation for all the repercussions laid on the Germans in 1918. In both cases, with no borderline defences in place, the Belgian/French border in the north was the weakest link: the French leaders had no desire to upset the Belgian leaders and create a diplomatic standoff.

A neutral country, with no army defences to speak of, Belgium was the back door into France. A request to allow the German troops through Belgium was rejected and the country became the first target finding itself under attack (a binding 1839 agreement with Belgium was the cause for the British entering the fray: in hindsight, one can easily see how events escalated to become the largest wars ever experienced).

The Belgian opposition was futile, with the German troops rapidly capturing all towns in their path. Repercussions were swift and aggressive, as a three month killing spree saw in excess of six thousand Belgians murdered, and the annihilation of historic centres and townships.

Now to today, as Bob and I commence our travels through central Belgium, we are discovering that although the medieval layout of streets has remained, most of the architecture of old has gone. In its place is the modern concrete jungle.

Sadly, this is the situation we found in Klein Willebroek and Willebroek.