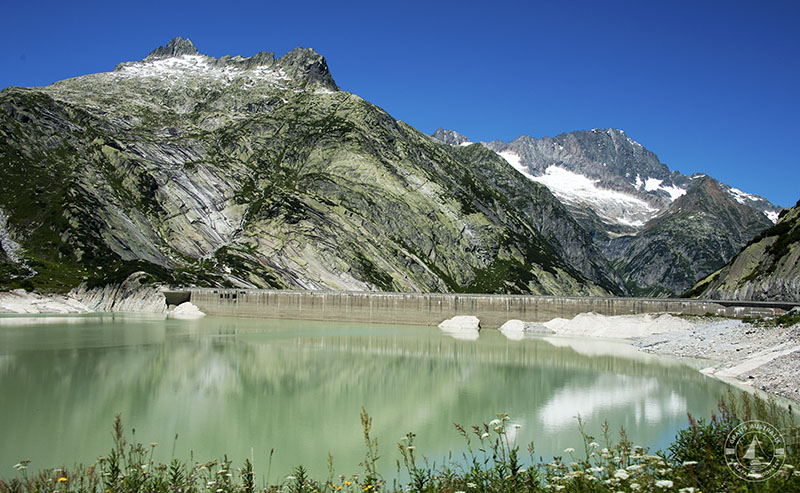 Next to the hotel was a dairy come stables in which cows were housed. After going into slumber to the sounds of a cow creating a combination of lowing and weird sounds – almost as though it was pushing, on the morn, we awoke to the most incredible bellow. Bob and I believe it was pregnant and giving birth, as all went silent after the bellow.

One word for the day’s journey was ‘Spectacular’!

Once over the border, in and out of tunnels of all lengths. Major road works appear under way all the way to Zermatt.

Decorations are evrywhere, as I discovered upon visiting the public conveniences. In one set, the walls were spasmodically dotted in tiles decorated with cows. I couldn’t resist running back for the camera.

Through a massive food bowl: cherries sweet and juicy.

Lakes were a regular sighting,

and an occasional white structure was in stark contrast to the colours of the landscape.

The higher we travelled, the more baren became the landscape. Rugged rocks covered in a carpet of green,

at times reflected into crystal clear water, whilst snow covered peaks were espied from a distance. Here a dam of milky white waters into which raced rivers and waterfalls, held one enthralled.

An hotel in reds and blacks sat upon one of the lower peaks.

A short time later, just the place to stop and take in the beauty.

Bob had a play.

The water took on different hues: it all depended upon the direction and backdrop.

Once off the main haighway we entered Grimel Pass with its massive switchbacks.

Quaint wooden homes, dark brown and rustic were dotted across the landscape, whilst the smell of wood permeated the air.

Cowbells rang across the silent landscape and alpine flowers of dainty blues and pinks ferns grew in climps.

Miniature tractors occasionally created a line – up of traffic behind as vehicles waited for the moment when all was safe to pass.

Having traversed a narrow winding track, Bob and I at last arrived in Zermatt and there were no signs for the hotel. To our amazement tiny battery operated vehicles zipped along the streets.

At one stage Bob was informed we were heading the wrong way and directed to turn around.

Back we went, believing it to be a one way issue. Returning to our starting point, up the road running running parallel we motored.

A friendly young couple waved us down and explained Zermatt was vehicle free and that the parking was in Täsch – 5km back down the mountain. They advised us to head back before the police caught us.

How fortunate were we to not have a fine laid upon our heads. Having had vehicles following us, it was now that we realised they were locals who had permits allowing them entry the Zermatt township.

Back we returned, parked the car and hired a taxi for the return trip to the township.

A true little metropolis this, with its narrow steep streets. Surprisingly, there were nowhere near the tourist numbers we were expecting, and pricing was quite expensive by our standards. That aside, the experience was well worth it as we caught sight of the snow encased Matterhorn towering overhead. Come on the morrow!

A comfortable bed in Hotel Bijou, just metres from the chairlift: perfect!!

And yes, they do speak English.