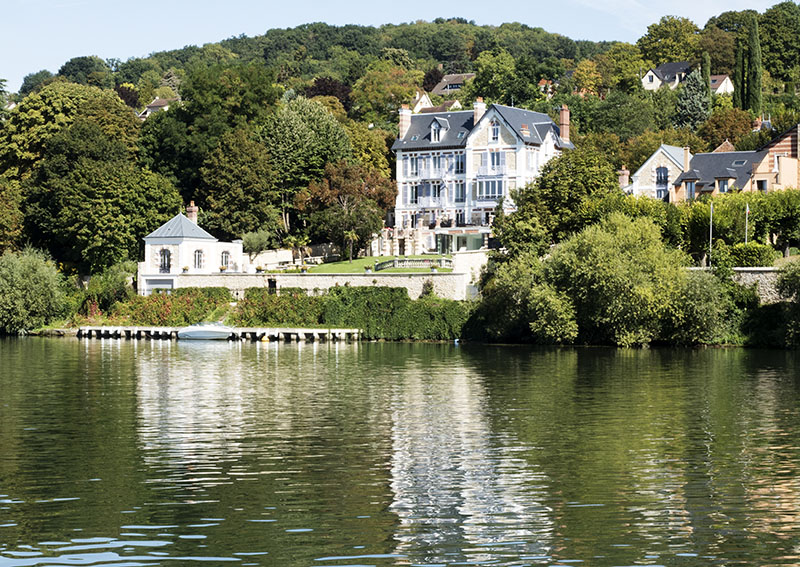 Yesterday, was the time for us to depart Vernon and point Gratis’ bow Paris way. Without exception, we shall return and continue on to the mouth of the Seine in the near future.

Except that the weather and light for photography was greatly improved, this return trip to Limay was just a repeat of the day trip down.

Today, was another exquisite day of weather, and a long day it was. With 41km planned, it was 6:30pm before a mooring for the night was to be found.

The scenery, as always, was beautiful. One could tell Paris was looming on the horizon, as townships were becoming ever more frequent and size increasing.

Occasionally there would be a boat of people out fishing or sailing.

Having passed the Oise intersection, filled with grasses and with a depth of less than 1.5 metres at its opening, our planned stop at Port des Yvelines (km 69) was a no go.

Across the way was a pontoon upon which passing boats could moor, but Gratis really was too large for what it was. A quick discussion, and we chose to continue forward.

Moorings were marked at frequent intervals on the map, however several were questionable in the extreme, others for large barges and the rest way under sized for Big G.

The most promising looked to be seventeen kilometres away at Saint – Germain – en – Laye. On arrival, the answer was no. We discovered one of the massive cruise liners moored there.

On went Gratis, finally arriving at the entrance to Bougival lock. It was time to make the decision on whether continue or not. Here there were large barge moorings set in such a way that it was possible to safely set Gratis alongside. Already at 61km of travel for the day, and unsure of what we would find at the moorings on the other side, this was it for the night. Peaceful and relaxing, with a couple of white swans for company,

Bob and I watched the sunset and settled in for the night.