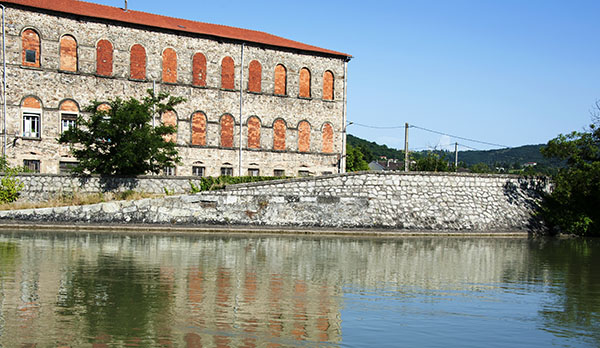 Yet another lock to commence the day’s sojourn!

Life jackets on, in we headed. Upon exiting,

we discovered work being undertaken: just loved the brightness of the equipment!

Birds delighted in perching upon the channel marker pylons.

The landscape continued to be more picturesque as the day passed.

Swans were so hilarious this day.

Refusing to move as Gratis approached, Two took off in a flurry of feathers as they suddenly realised there was a chance of being mowed down.

Another four refused: there was no way they were being made to move. Instead they swam like the wind while I at the bow directed Bob.

A couple of hours after departing Lock Beauchastel, we stopped for fuel in Port de l’Eperviere. After looking at the pontoon set up for there and Lyons, we believed this would, in regards to mooring and pontoon set up, be the better option. There were red and green markers positioned for those wishing to enter.

It is important to allow for the strong flow of the Rhone’s current, which cuts across the entry at right angles.

This is an issue on all fast flowing waters when you exit or enter them at right angles. Entering is best carried out by going against the stream (from down – stream!).  Under almost full power we slowly past the starboard marker moving toward the port marker whilst gradually sliding sideways toward an imaginary line extending between the two markers. Once on that line and with bow close to the port marker a very quick turn to starboard and we shot into the entrance. Even though we were well clear of a stick marking the shallows which extend out from the port groin, we still hit bottom: fortunately only mud and we went straight through it.

Mooring to the fuel dock was easily carried out and the cheapest fuel to date purchased. Exiting was carried out in much the same way as entering, ensuring engine power was of a strength that would counteract the river current upon re – entry. Even so, although we aimed for the upstream entry marker we were dragged perilously close to the down – stream marker pole on our port side and only by applying full power were we able to slide by without contact.

Directly after Valence the going once more became difficult.

At Pk 101.8 the Isere River flowed into one of the many canalised sections. Racing around a bend, just one kilometre later, on the commencement of yet another curve, the waters split. On our left they ran into an exceptionally narrow opening across which a barrage had been constructed. With the waters still high and fast from the floods – suffice much less than before – a massive swirling effect (not quite a whirlpool) took place as water unable to squeeze through the narrow opening continued on to hit the opposite bank, where it was thereby reflected against the main current. This activity created breaking waves and made navigation tricky as Gratis wove to and fro in the waters. Impossible for AP to deal with this type of situation, Bob handled this section manually. At 2200rpm, Gratis crawled along at 3 – 4km/hr (still an improvement upon the .8km as we passed under the bridge just after Avignon).

the decision to continue roughly another ten kilometres and moor at a pontoon just out of Ponsas was made.

Quite high, it was suitable, but a bit tricky to undertake in the still fast racing waters. On we went…

In Saint Vallier the mooring was suitable for barges only: on we went…

Pk 73, beautifully protected: the book was correct – far too shallow: on we went…

A few more suitable places, but already taken or the current still too rapid. On we went…

Our last chance, Andancette was another suitable mooring but already taken: on we went….

Tired and grumpy, both, this was last thing Bob and I required!

Assisting in whiling away the time were:

Just beyond Andancette, the Andance Channel – another canalised section of the river – had a series of groins set along its edges. This presented 5km of very strong current between pks 68 and 63 (pk = km mark) and more standing waves. Even at the best of times it is a difficult section, but this June it was a challenge. Still, conditions still weren’t as bad as those we experienced at Avignon. Gratis was at 2500rpm doing 5 – 6km/hr whilst weaving to and fro and remaining inside of the channel markers, but as close to the water’s edge as possible.

(We have just been unlucky, in that it has been an unusual year with little snow fall and very late heavy rains – at the beginning of summer. By all that we have read, one would not usually being encountering the currents of this strength by practically mid – summer.)s

Murphy’s Law: at the time you least want something to take place, it will. This time it took the shape of a massive barge steaming up from behind, whilst another approached from the front.

Despite its bow waves, the passenger liner approaching from the front was an easy passing. The commercial barge steaming up at 14km from the rear was another matter! Closer, closer, closer he edged, all the while Bob declaring it would stay well to port of us. Think again! Try five metres!! In the scheme of things, five metres of distance may sound safe: Bob and I were aware however, that all it required was one massive wobble in the wrong direction from either boat for us to be history!

With no room for error available to Big G, from Gratis it felt as though one could reach out and touch this giant. Thankfully, the helmsman had slowed just prior to arriving at our girl’s stern. How time decelerated as the barge’s bow crept along and we continued to watch his forward wave inch our way.

To speed the process along, Gratis was slowed and we eventually watched as the stern of the barge edged in front. It was at this moment that things could really go skew whiff, since the greatest power and turbulence emanated from the stern of the barge. To our immense surprise, the expected wash didn’t eventuate: maybe the movement of the river’s water counteracted the turbulence created by the barge. Whatever the cause, there were two highly relived people on board Gratis!

A further hour passed and Lock Sablon at long last appeared ahead. Praying to the Gods that the mooring was free – mooring alongside other craft is not allowed at the locks – on Gratis motored. Peering through the binoculars, fortune was with us. No boats. The mooring was ours for the night. Relief like you wouldn’t believe swept through us both.

Surrounded on both sides by trees, this spot was a peaceful hideaway, yet still close to numerous tiny villages. Requiring a stretch before heading to bed, Bob and I ambled across the lock into Centrale de Sablons. Wandering along its main road, Bob and I stumbled upon a small fruit shop. Heading in, we were greeted with box upon box containing 5kg of fresh fruit. Too much for just two, however we were in luck. Within a fridge were 1kg punnets of nectarines, apricots and cherries! Departing the shop with cherries and nectarines in hand, the fruit was ‘Manna from Heaven’!

Now that was worth the long haul!