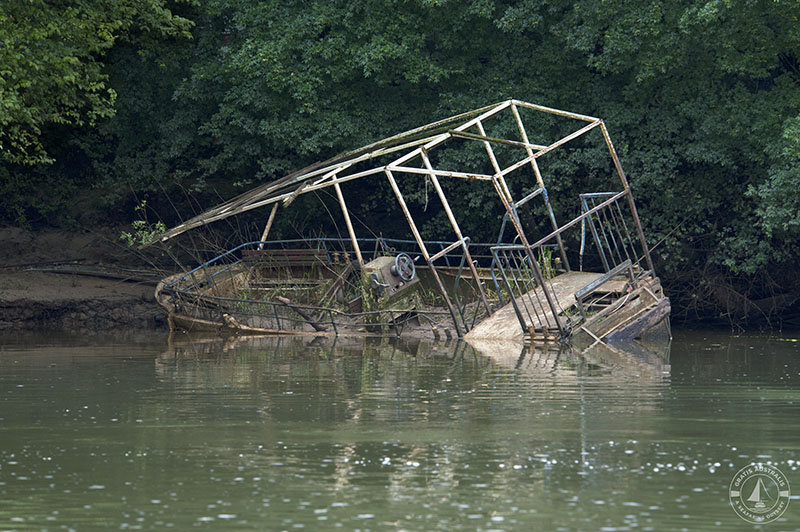 With the pressure on to reach Germany, the decision to leave exploring the old part of Lyon until 2017 was made.

An imposing abbey stood tall upon the aged ramparts

whilst in the lower walls tunnels led who knew where.

An occasional white washed building sat not far from the river banks.

Waters only moving at roughly 400m³/s, it was a peaceful relaxed day of motoring: such a difference after the challenge of the Rhone.

rowers were out in their numbers,

and fishermen were out in their numbers.

Barges motoring along were left behind, and only one passenger vessel passed us by.

One of the bridges had an interesting array of what appeared to be inflatables upon its towers.

Locks were much smaller, lifting us only 3 metres or so. The main difference was the bollard set up. Instead of having one bollard that moved up as the water filled the lock, in the two we passed through this day, three fixed bollards were positioned one a top the other with about 1 metre separating them. Also placed upon the top of the wall were large bollards.

Bob and I found the easiest way of handling the system was to have two forward lines, a centre and stern.

One of the forward lines was placed on the middle bollard and immediately tightened, thereby rapidly followed by the centre and stern lines. As Gratis rose to become level with the topmost bollard, the second forward line was placed upon it, rapidly followed by the stern and centre lines (as time passed and we became more adept, the number of lines utilised decreased).

Lock filled, gates opened, out we motored, into waters that flowed a little less to that within the lower level.

Late afternoon upon us Creches – sur – Saone was our stop for the night. An amble into the township which rested 1km from the river: old farmhouses had been beautifully renovated.

That evening, in the most pleasant of surrounds where waterlilies grew in abundance whilst a lone swan awaited tidbits provided by the patrons of the nearby café (noisy for a while as a band or two played, but not too bad), we relaxed and slept.