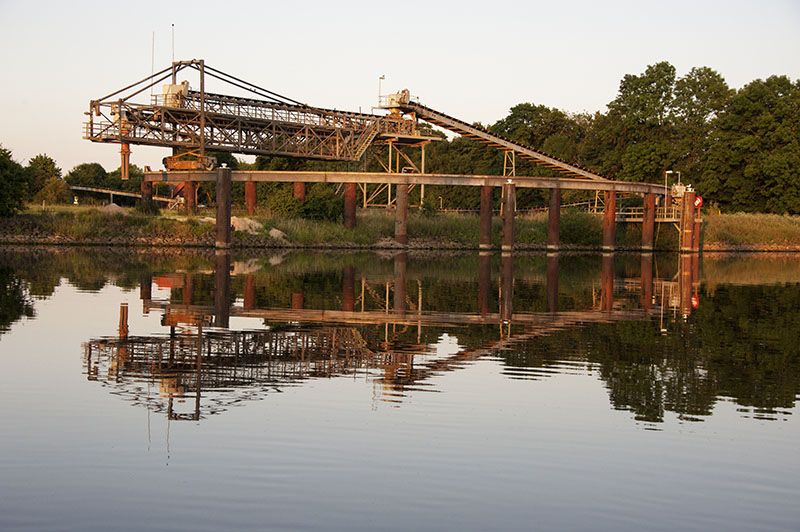 After refilling the fuel tanks at the Minden Boat Club (97km mark on the left hand bank of the Mittelland Kanal when heading in the direction of the Weser). It took a while to sight, as the bowser is set upon a small red trailer.

At last it was time for our trip upon the Mittel Weser to commence. Into the Schactschleuse we went. A fourteen metre drop later, outer we came!

Three locks within a short distance: kilometre counting is required, as most of the locks are set within a side (schleuse) canal and the numbering for these commence at either 0 or 1. On returning to the river, its weaving and winding path meant that several kilometres may have been missed. For those unable to find it, the VHF (UKW) radio station for the Schactschlueuse Minden is 22. Constructed between 1911 and 1914, the schactschlueuse is a shaft sluice that has four levels, each with a number of saving basins (16 in all).

A bit more work was required of us, as there are no rising bollards to assist: most locks range from a 4 to 7.5m drop. A suggestion that will assist with mooring in the locks – yes, we have been watching a few of the other boaties who have utilised a different technique this year. Attach a stainless – steel hook to a rope, attach it to a ladder within the lock and tighten the rope. As the boat rises or falls, release the rope, remove the hook and place it on a new rung. Repeat the process until you have attained your destination.

As much as we would have liked to head the way of Hameln (infamous for the tale of the Pied Piper) in the south, the water depth couldn’t be assured past 1.2m: just a little too shallow!

The books say the countryside isn’t that picturesque, but we beg to differ. It’s low flood plains that are utilised as pastureland in the interim. With a gentle flow of roughly 2 – 3km/hr, Gratis idled along and we lapped up the atmosphere.

It was seagull and tern heaven, as they gormandised on the tiniest of insects and fish.

The geese, heads popped up for a look.

Other than the locks and occasional anchorage for smaller boats in the river arms (we won’t take a chance as the depths aren’t monitored), there were no possibilities for stops along the way.

The night’s stop was on the edge of the small dorf of Stolzenau. Although the dock was a little high – one to one and a half metres above the water – and the bollards quite far apart (in addition to being almost two metres from the edge), it was a restful setting. Not really that far from the sea, the town is situated upon high sandy heath land (‘geest’) in which marshes dot the landscape.

Its name meaning ‘Proud Aue’, derivations of its spelling eventuated in that of today. Early settlement here has so far been dated back to the stone age.

Highlights were sighting baby storks in the largest of nests high atop a tower, and Egyptian geese swimming right outside Gratis’ door.

How to unload a car from your barge.