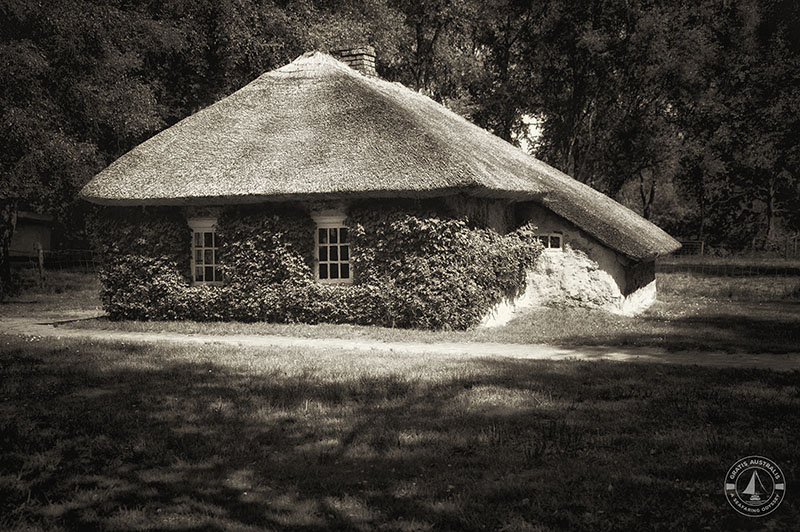 A short seven kilometre bike ride from Aurich is Moordorf, and it is here that the visitor finds the Moormuseum.

Located on just over three acres of peat land, this is an open – air museum that leads one through the colonisation of the town: as dictated by the Prussian Kaiser, Friedrich II, in his 1765 Peat Land Cultivation Decree. The deserted, undeveloped moors were divided, and people enticed to escape overcrowded regions with the promise of their own land. No infrastructure for transportation – such as canals – prepared, in conjunction with poor soils and few crops reaching maturity, meant that with no income coming in, the population became increasingly poorer.

For the people here, it meant approximately two hundred years of severe poverty. Literally called ‘the museum of poverty, we took in the various displays,

then ambled along the pathways – past where the soil was being tilled (if one is fortunate to arrive at the right time, it’s possible to view the re – enactments),

exploring first the houses recreated from clay, sod (sodden) or turf (Plaggenhutten from peat), then the original brick homes.

How tiny was this clay house! There was no standing room at all – and I am not that tall!

One room for the people and an adjoined barn for the animals was all they could afford.

Bed wise, the parents slept at one end and the children the other. For those who are wondering, there was no chimney or toilet.

The peat that led to the lifestyle these people lived

These people were able to afford a chimney and an outside toilet.

Goats and sheep fed upon the heathland during the summer months.

The boggy conditions were wet, cold and uncomfortable to work in.

The Plaggen and Soddenhutte were an interesting combination. This particular one was for the animals.

This was a replica of one of the homes used between 1767 and 1800. No chimney or windows: one can imagine the condition of the lungs.

In the year 1813 these improved conditions were to be found in some cases.

The homes were a little larger, although it was still a case of people one end and animals the other.

Twelve people lived in a house of this size.

There was an outdoor cellar, inside doors had frames and closed, and the toilet was within the barn.

Although larger, this was still one room plus barn. This ceiling was a little higher.

Bed areas were separated and dark, and heater with chimney was used to warm. Blankets were coarse whilst mattresses were made from hessian and filled with straw.

The Kolonisten Haus from 1900 was constructed from brick and, in a first, the floors were no longer dirt.

Although drier and warmer, with better, conditions were still cramped, with one end for the people and the other the animals.

A skylight allowed more light in.

A second house of brick was a little larger and actually had ceilings. By our standards of today, this was still pretty basic. With Bob in the picture, you can see how low this structure still was.

The last of the brick houses dated from the 1880s. Animals still resided at one end, whilst all living was still carried out in the one room, although if the family was better off financially, they could afford to construct a cook house and outdoor cellar. In this home, there was also an area set aside for carrying out the past – time of spinning and so forth. Ceiling cavities were now also used for storage.

The beds were were still in the same area, and just as cramped! This was an original house and as one walked past the beds the smell of mold wafted up the nose. That’s Bob saying, ‘No wonder they died young!’

How realistic was this!

On departing, this fellow came out for a nosy as we headed past.

What conditions these people encountered! It was interesting to learn that people still lived in these conditions as recently as 30 years ago.

Our planned departure didn’t take place this afternoon. It turned out that the large white bridge we passed beneath on our way in, only opened 3 days each week to allow the touring ferry through. This wasn’t one of them.