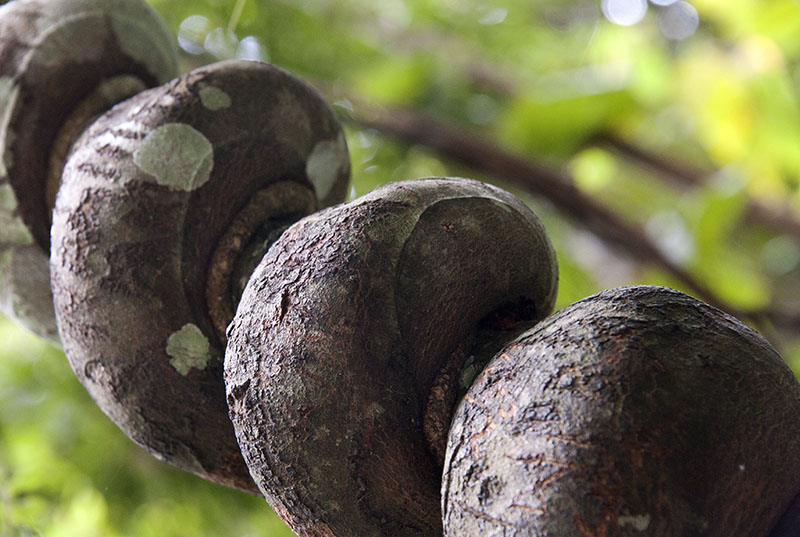 This east Australian landscape experienced the ravages of a shield volcano, with its volcanic rim plateau resulting from both the lava flows that enshrouded the region millions of years in the past, and the weathering that later took place. By the time the volcano’s eruptions ceased, it had attained a height of 2,000m with a diameter of 100km, ‘forming a vast dome stretching south to Lismore, west to Mount Lindsay and north to Tamborine Mountain’.

After millennia of erosion, Tamborine Mountain now peaks at almost 600m above sea level– a mere baby when compared to those or Europe.

Tamborine is an English derivation from the local Aboriginal word ‘Jambreen’. Meaning wild lime, it was an appropriate name as lime trees grew upon the mountain slopes: in days of old, the Aborigines feasted upon this native fruit.

It was to this beautiful scenery that our travels took us this day.

Long steep roads that lay at an angle of 18°, meant caravans provided the us with the view of incredible panoramas way below.

The privately – owned 1.5km Tamborine Rainforest Skywalk set in 30 acres of rainforest was worth the visit. Well designed, the pathway led us both across the treetops and through the valley to the rock pools below. If one was fortunate, a platypus may be sighted. Well documented signing highlighted various species of trees, whilst inside the office, displays of butterflies, insects and information greeted us. The recommended 45 – minute meander was well surpassed by Bob and I when, two hours later, we exited the site.

Some of the animals found here.

Our return journey home took us to the Tamborine Mountain Glow Worm Cave where the only glow worm conservation project in the world is taking place.

With the population in the wild rapidly decreasing as a result of the loss of its moist habitat, the owners of this property had a cave constructed for the sole purpose of ensuring the species survives. People are their greatest danger. Standing just one metre from them without covering nose and mouth, is enough to cause entanglement of their insect catching strands. When this happens, no food for a few days.

Consisting of two caves, a short 7 min film in the first, educated the viewer on glow worms, whilst the light dimmed, and our eyes adjusted.

Then, with glow bands placed on our backs, the aim to highlight the person in front, we passed through a closed door into the inner sanctum in which the glow worm community now resides.

Only one word sprang to mind as we entered to the sight of thousands of tiny green lights sitting upon the ceiling and walls: WOW!!!!!

So small, tiny insect catching silk tendrils dangle from the worm, reminding one of both a spiderweb that glistens in the dawn light as the sun rises, and the prongs on a comb.

This community of tiny critters commenced as one of 500. Today it numbers in excess of 8,000. Counts are carried out annually with the use of an infra – red camera and a computer program later undertakes the counting process. As the light of the glow worm doesn’t shine continuously, this number is only a guide. The aim is to eventually transfer them into the wild.

The larva of a small fly, glow worms are found only in Eastern Australia and New Zealand. Those we saw today were unusual in that they emit green light rather than blue: the effect of the blue light upon their tail shining through their yellow bodies.

These tiny creatures emit 99% light and only 1% heat – now that is how we need to run our power. The day that event takes place, is the day the earth commences its recovery from global warming.

Disappointingly, no photos could be taken, as any white light results in the glow worms dimming their light (infrared is the go in this dark world).