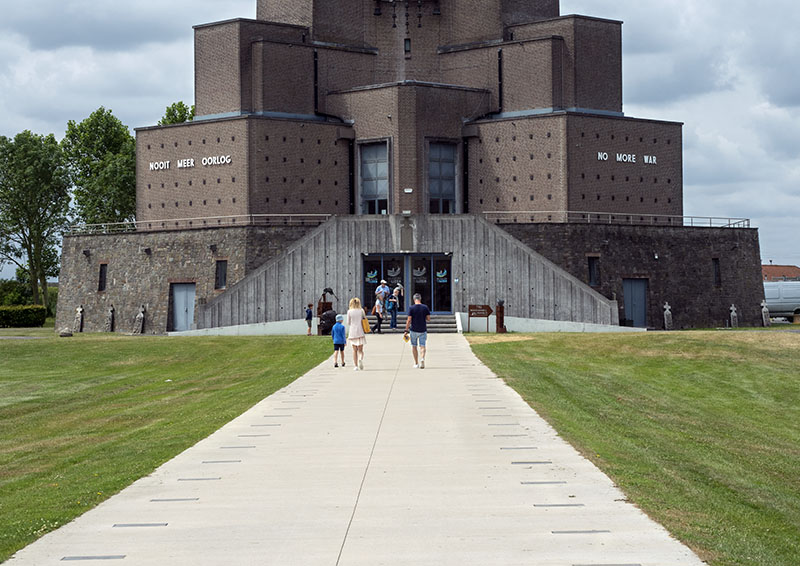 Flanders Fields contain so many monuments, cemeteries and museums dedicated to those hundreds of thousands people killed that it would take a person months to view it all. Bob and I have decided to focus on just a few places on the list, and several are in, or near, Diksmuide.

Just across the river Ijzer, and easily visible from Diksmuide marina, the Ijzertoren, a memorial in which is found the Museum Aan de Ijzer towers over the now peaceful West Vlaanderen landscape.

It is truly difficult to believe this was the scene of the Western Front, where some of the bloodiest battles in mankind’s history took place.

This was our destination this morning. The Dunkerque Museum was excellent in that it detailed the movements taking place during world war two and covered the unemotional aspects, however, it was in Museum Aan de Ijzer that the realities of the First World War and the effects it had on the peoples truly hit home.

Engraved on the tower, a Celtic Cross and the letters AVVKV: ‘Alles Voor Vlaanderen, Vlaanderen Voor Kristus’ – words emotive for the Vlaanderen movement in its early days, but today with a much more liberal view than that of the far right of the early to mid – twentieth century, as the concepts of peace, tolerance and freedom are now at the fore with the message: ‘No more war’.

A ruined gate and a tomb constructed in remembrance soon after the ending of The Great War were followed by the path leading to today’s structure. Inserted into the pavement were plates on which each of the region’s townships affected during those five years were etched.

Along the way were sculptures created from the remnants of war.

Inside the monument, one enters the lift and is rapidly transported twenty two stories up, to enter a glass encased viewing room from which the whole of Flanders Fields can be admired. Not enough? Well, a few sets of stairs, on which were set the names of the fallen, and you emerged into open air. Now that was the view!!!!

Now for a bit of humour. Can you find Gratis?

Returning inside, the visitor commences the tour of the museum via staircase: each floor covering a different aspect. Tying all together were the windows,

‘windows national identity’, one of which noted:

“Wars are conflicts which cause nations to either emerge stronger or to disintegrate. These windows have been conceived as reflections which connect to Great War events, but which open them up to universal aspects of the complex concept, ‘national identity’. ……. open the side panels of the flag and discover why the flag never fully covers the load”.

This text highlighted the state of affairs at the time.

With the turmoil taking place in Europe at the time, I have reached the conclusion that if the murder of the Archduke hadn’t taken place, then some other trigger would have occurred to set WWI into motion.

How was this for consumption of specific goods in 1917!

The mind boggles at what the total would have been for the full four years!

This beauty gave one a true understanding of the size of some arsenal.

A focus on the women who silently aided the cause of the Allies though the means of nursing, spying, sabotaging, forwarding letters, taking on the role of ‘godmother’ and even prostitution: it was lonesome for the men on the front lines……

Two British nurses, Elsie Knocker and Mairi Chisholm, constructed a first aid post in the basement of a Pervyse house, set just behind the firing lines. Named ‘The Angels’, ‘The Little Muses’and ‘The Little Misses from Pervyse’ they saved hundreds of lives.

Widow Marie Tack, or Madam des Soldat as she was named, who lived a short distance from the front and had accommodations for visting soldiers and high ranking peoples who signed her visitor book. With her donkey and dog, she travelled to the front line where she presented cigarettes and food to soldiers dwelling in the trenches.

Then there was Mieke Debeout, or La Jaconde as she became known. Residing within the German firing line in her home that was partially destroyed by weapons of war, she welcomed the soldiers with a glass of warm goats milk. A feisty woman, after artillery bombardments, she would head to the front and return fire, cursing all the while.

Prison time for many

Whilst for others, such as the Belgian spy Gabrielle Petit, it was death.

Then there were the women who aided in alleviating the loneliness of the soldiers. Some became prostitutes, whilst others became the equivalent of godmothers by sending letters and parcels. In addition to this were the postcards and magazines.

Small videos and 3D displays assisted in setting the scenes.

There were also the games…..

Two floors of trench simulation. That with the sound of gunfire, a high pitched whistle and a soldier choking as a result of chlorine gas inhalation were the most confronting.

The section in which the beds were set detailed the harsh reality of conditions for these poor men. Called galleries, the ‘beds’ were constructed of either chicken wire or telephone wire and covered with cloth. Set in sets of triple bunks, there was 50cm head room space between each, whilst the length and width measured 47cmx184cm. Damp air, little oxygen and chilling cold made the most unhygienic of environments, in which the men were not allowed to remove their shoes.

One could only watch mesmerised as a video detailing the excavation of a trench found on private farming land undertaken: Gas masks, clothing, bullet shells and more were unearthed.

How emotive was this spiel written by Max Deauville, La Boue des Flandres 1922

“The mud, the horrible mud, the worst thing in the world, in which crawls an army, which gives horses, men, canons, carts the appearance of ordure splattered vermin, bloody puss which covers the Flemish land and eats away at it, which slithers, creeps into the landscape, the suffering landscape which only shows here and there its fresh greenery, its azure sky and the red roofs of its houses.”

Something that surprised us, but probably shouldn’t have, was learning that a core of Vlaanderens (the far right) supported the Nazi’s and did all in their power to disrupt the Allies. Why shouldn’t we have been surprised? Well, in a population of people, it’s natural for there to be two or more views on any topic: this really was no different.

The artwork on posters and depictions of lead people of the time were quite interesting to peruse.

The message throughout this region of Belgium is ‘War No More’.