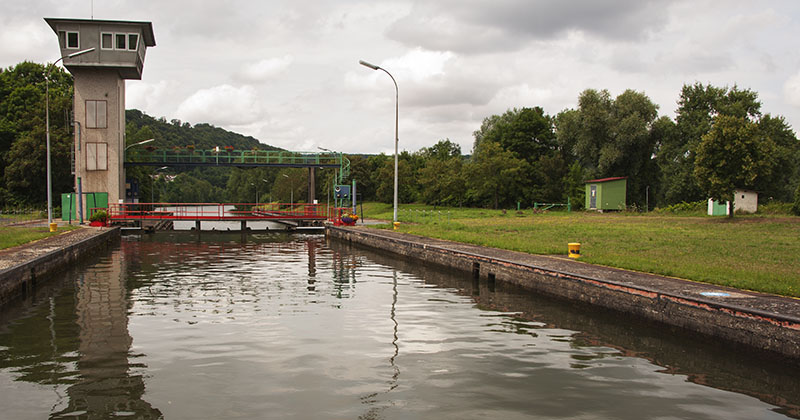 A late 11:30am start and an easy run: except for the water hose of the engine popping off a few times. The third saw black smoke steaming from you know whose ears. It turned out to be the result of shards from the old impeller blocking the exit, which in turn created pressure build up that caused the hose to blow off: an issue easily rectified!

With industrial sites, housing and an occasional shopping centre or two situated upon its banks, the short distance of the Canal de la Marne au Rhin running from Nancy to the Moselle was pretty mundane.

Two lift bridges operated by remote camera and as many locks later, the Moselle was entered. Our remote handed back at the Ecluse de Junction, it was time to return to those operated by lock keepers. VHF radio or the phone were the mode of communication once more.

Running with the current, Gratis averaged speeds of 10km/hr at 1700rpm – what a difference to our earlier experiences upon the Rhone and Saone.

The early mileage along the Moselle was much the same as the canal, however the farther we moseyed away from the city, the more pleasing the landscape became to the eye.

Despite all of the research carried out, and knowing the dimensions we would be encountering, the locks were still a massive surprise.

In the massive leadup to the lock itself, concrete structures in which bollards had been affixed, provided a waiting area whilst the locks were prepared for entry. Set for the larger vessels, we attached a stern line in tandem with either a bow or centre line (it depended upon the ease with which that at the bow could be attached).

A good 12metres in width to cater for the largest of barges,

the exit a packed picnic lunch away:

humungous was the word! To top things off, there were more bollards (affixed both above and within the wall) than one could count. It was a matter of finding a set situated just the right distance apart: those toward the rear tended to be the ones.

One bonus of river travel is the opportunity to see how repairs and maintenance on bridges are undertaken.

European residents delight in setting up camps/picnics by the water’s edge.

After 4 locks and a half hour lunch break, a distance of 30km travelled, by 16:30pm Pont a Mousson, our night’s mooring was attained. Choices of anchorage here, with the Port de Pont – A – Mousson or town moorings upon the wharf: we decided upon the wharf. Free, quiet, swans feeding and water lapping – what more could we ask for?