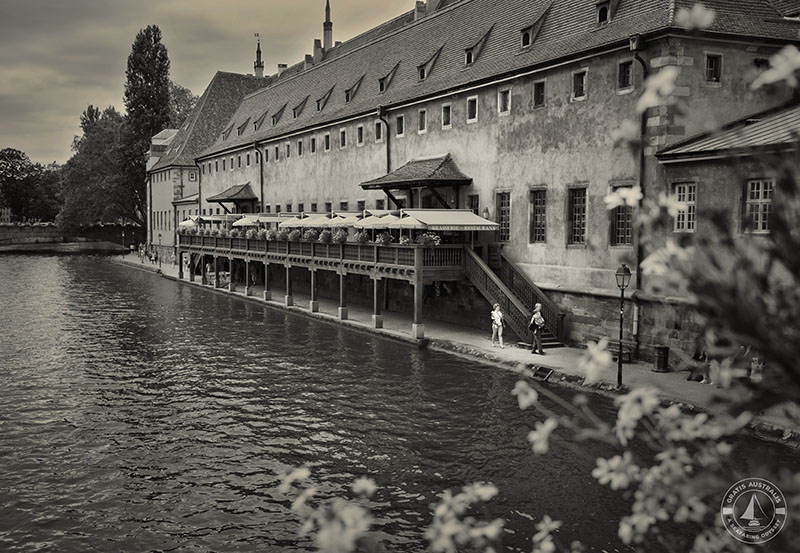 This was the day we commenced a week’s exploration by car.

In the Meurther valley, Bob and I chose the picturesque route that took us north of Nancy and Strasbourg

In abundance, were the community vegie gardens that allowed those of the close knit high rise complexes their small piece of earth. As our drive continued, those small family plots of farmland that Europe was once so famous for gradually faded into large tracts of glass houses where small had been combined into large.

Champenoux, with its massive military gravesite where row upon row white crosses signified the thousands of lives lost in the ‘Battle of the Great Crowned’ which took place when the Germans attempted to overthrow Nancy during World War One. In total, the cemetery covers 10,130 square metres and those white memorials represent the 2,862 men buried there. With the length of our lives so miniscule in the scheme of life itself, one really does wonder how humans can create such havoc and destruction upon his fellow men!!!

Gently winding roads, a conglomeration of dense forest and farming land, this was maize country in the final approach to Strasbourg. Farmers had commenced the long tedious hours of tilling the nutrient rich chocolate brown soils. In Lagarde, graveyards of rich golden stalks were all that remained of harvested crops, whilst nearby grain storage sheds foretold the next stage of the story.

A couple of stops as we came across the Canal de la Marne au Rhin: so picturesque. This was a route we could have taken on our journey to Berlin, however the Rhein runs at great speed between Strasbourg and Koblenz and with the unexpected floods creating above normal flow flor that time of year, we chose to play it safe.

Mid – afternoon, it was possible to espy our destination in days into the future – the Black Forest, a black shadow in the distance.

The higher we climbed, the greener became the etangs and dairy farms dotted the landscape. House structures began to alter with slopes on rooves becoming ever steeper, the most exquisite of wooden beams and vibrant colours upon the walls. The peoples here appeared to be better off financially than those in south, with towns well cared for and little sign of deterioration. In the clean fresh air, eiderdowns and pillows aired upon the window sills – just like detailed in stories of old.

Passing through Heming we just had to stop for a photo of the horse and dairy stables.

In pride of place were these old implements,

with the water fountain out front.

At Hesse, we came across a ‘le boat’ headquarters, where those who desired to partake in a simple canal cruise, could collect their holiday home.

It was in Phalsbourg that Bob and I dined upon the most scrumptious of meals. Flavours mixed beautifully, for myself it was beef succulent and tender, whilst Bob consumed a pasta to die for.

The main church was plain, but nicely done.

We go a on a great deal about the churches, but these played a great part in the life of each town’s peoples of yesteryear.

A little out of place with the old feel of the town was this modern piece of art.

Every now and again an old stone cross marked the ancient travellers’ routes: some so overgrown they were difficult to distinguish.

At long last, Strasbourg, our destination for the night: the tallest of gothic cathedrals dominated the country side and city. Vibrant, dynamic, massive sales with 70%+ were taking place. Old timber buildings, the city centre was vehicle free, voices were muffled within the cobbled streets.

A touch of the whimsical.

A town with a history of two thousand years, its position enabled Strasbourg to become an affluent merchant city and a metropolis in which entrepreneurs flourished. Standing upon the border of France and Germany, cultures with their varying beliefs and practices thrived in a town where tolerance abounded, and enabled the successful modern city of today to grow.

Outside, heavily carved with such great detail – the hours of work involved are beyond belief,

whilst inside this monolith, its timber seating was simple and unadorned.

High unpainted ceilings, dark until the timed lighting (.20c please) bathed a specific area in light once more: the clock – what a work of art,

that told the story.