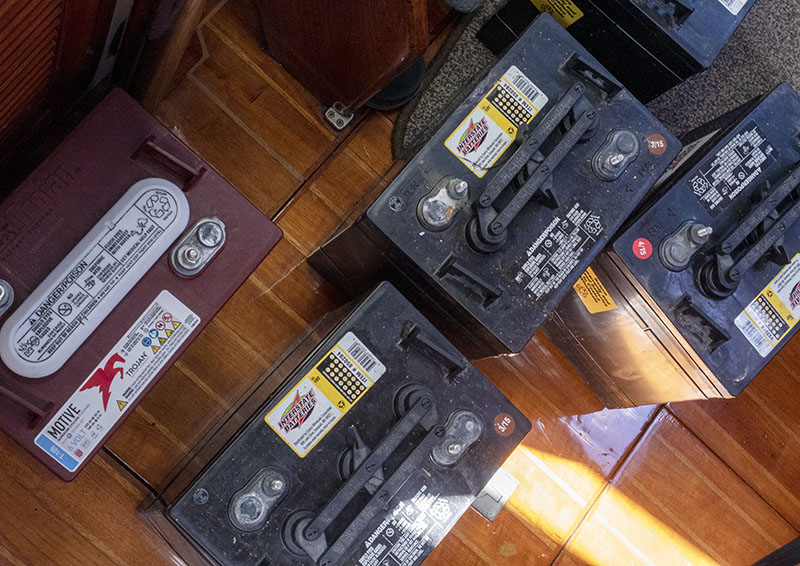 The lovely ex owners left an array of items that somewhat eased the pressure of commencing life on our third home and this was much appreciated. Items such as sheets, towels, cooking implements and work tools meant there was no requirement to rush out and make purchases other than for food during the first few days.

The following week found us both going through the boat to assess what was required or not.

The first major job for Bob was replacing the batteries.

A result of overcharging from incorrect meterage, the boat batteries had been boiled, so a new set was purchased. With lithium still way too expensive here, and closed cycle twice the price to that we paid in South Africa, it meant a return to lead acid for this time round. With a much larger space to work in than that the lazarette in Gratis, this was a dream for my Love.

He can actually sit with ease!

The engine isn’t bad either, and is easily accessed as well.

Up until now there was no working shore power connection. With the batteries still not charging correctly, it meant the fridge, computers and so forth couldn’t be left working 24/7. Bob purchased the 240vt plug outlet required and converted the shore connection from the US 110vt to what we in Australia and New Zealand use.

The inverter that was purchased to run only the US washing machine was brilliant and Bob hoped he could utilise it for assisting with the charging of the battery system. A bit of research later, it was with great disappointment that he discovered this was not to be. Out went he to find a suitable replacement, to return some time later looking like the cat who had found the cream…….