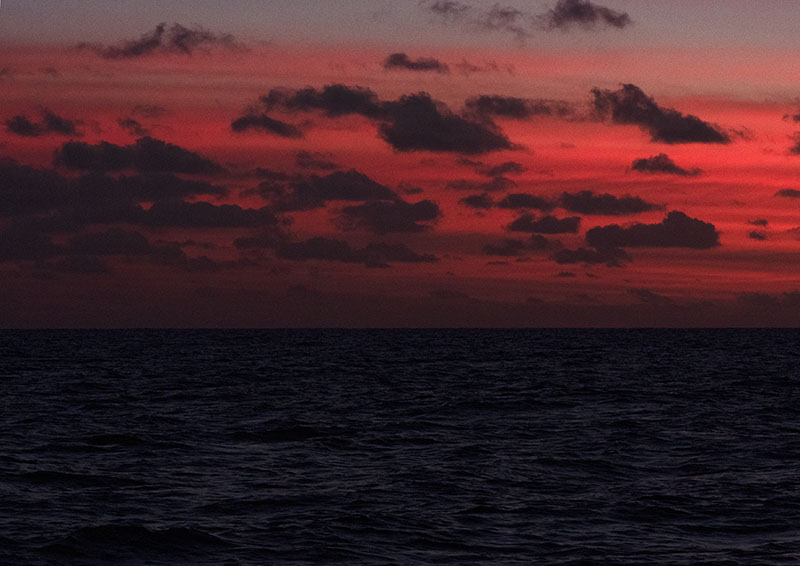 Day five of what was proving to be the ‘slow boat to China´, the waters were slightly improved, but not much.

For the first time since the last sail car had broken, the boys were able to substitute the main’s top car with one from below. Repairs completed, the sail was raised and set at the third reef so as to reduce the pressure on the cars. At long last the deafening roar of the engine was shut down stop.

Mid – afternoon and a change in wind direction took place as a depression raced through. Over the ensuing nine hours a steady 17 to 25 knots saw us attaining an average of 6 knots in speed – woo hoo!!

During those hours, in line with the steady increased strength of wind the sea state built to 3 to 4 metres in height. Now on a broad reach, water splashed hither and thither over the bow wave trains rose out of nowhere, combined, then crashed just as we came in line. With regularity, a line of water spewed forth over the aged covers and found each minuscule crack. Pouring into the cockpit, any object – including us – laying in its path was saturated beyond belief: so much for a dry warm cockpit!

Remember those confused conditions? Well, even with a steady wind strength and increased wave height they didn’t dissipate. In fact, the bucking bronco effect worsened! Once more, it was a case of holding on tight. I spent much of the time residing on the cockpit floor where, with use of the feet, it was possible to pinion oneself in tightly. Aahhh! That was much more comfortable.

2300 and without warning the wind died from 25 down to 10 knot variable, which also meant Australis 1 rapidly decreased speed to about two and half knots. Rocking and rolling, with sails flapping, there was nothing for it, but to turn on that wretched engine………….

Of all our journeys, we had never experienced these sudden drops in wind speeds: the norm is for a gradual decline.