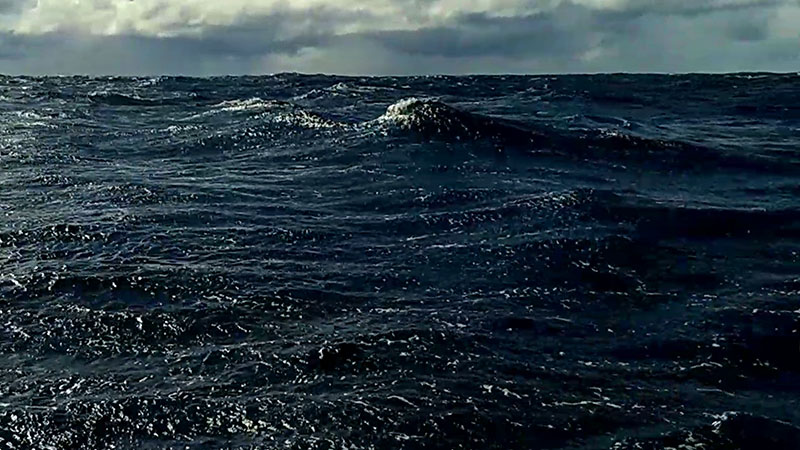 AND THE WIND CHANGED!!!

Bob and I arose to find another day of squalls ahead of us, and the seas no less confused.

As always, our experiences this day were no less challenging.

Without warning, at the proverbial click of a finger the wind dropped a massive 19 knots from 25 down to 6, leaving Australis 1 rocking and rolling as the sea lost her momentum. We four stared at one another in utter disbelief!

Examining the sky as waves crashed and fell around us, we studied the squalls surrounding us in an attempt to figure out what the heck was going on! Yep!!!! Another one was on its way!

Hanging on, it was a matter of waiting…….

Move on to mid – afternoon….

As yet another of those never ending squalls making passage through when, out of the blue, the wind underwent an immediate shift of direction. For fifteen minutes or so, Australis 1 wallowed like a beached whale as we waited for the wind to complete its shift and strengthen. Finally there – or that’s what it wanted us to think – we got to work!

For ease, the gennie was furled then Australis 1 gently gybed – we didn’t want to lose the main – and the sail reset as Cliff continued following the wind.

You wouldn’t believe it – or maybe you would! We were now pointed in the direction from whence we had come.

During those few minutes, the wind had undergone a further shift, returning to its previous southerly direction.

There was nothing for it. Taking the lazy way out this time, the Iron Main burst to life, the gennie furled and down came the main – damn, another two cars broken, so that was the end of that for the remainder of the journey – and  through the wind our beauty turned. Returned to course once more, the foresail was poled out and the engine silenced. Well, such is life!

The following hours found the wind remaining rather stable for a change, but it was a case of hold on tight as swells merged and sent our girl swinging like a pendulum. Additional hand holds are on the to do list, that’s for sure!

Today two swell sets, wind waves and currents kept us well occupied.  17 hours from 0400 and we had sailed a massive 77nm, thereby averaging a mere 4.5kn/hr.