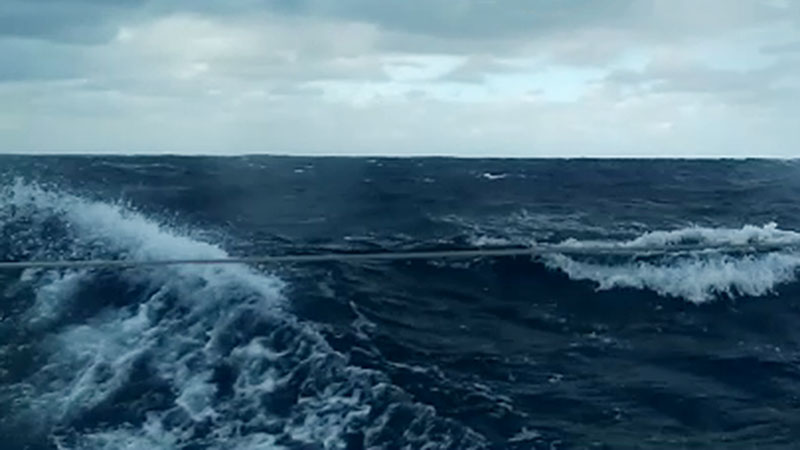 Awakened to the sound of howling winds and winches grinding, it was with a rush – or as much as one could in the conditions – that I hastened upstairs. The storm, I discovered, had struck with ferocious vengeance.

Cliff was at the helm, Bob on the starboard gennie sheet winch and Anne on the furling line winch. Grabbing hold of the spare gennie sheet, I battled pouring rain as I pulled the excess of port sheet in as the foresail furled. Between wind gusts, inch by slow inch, the sail was reduced until reefed to handkerchief size. Just in time, too, as the instruments hit 42kn spikes!

Over the coming hours, the seas built to heights of 4 metres, and Australis 1 was on a roll as she raced along at a fabulous 8 knots at the peak of the storm.

Two hours later the howling winds softened and a torrential rain came bucketing down. As had become the norm in these seas, as the winds died,

so did the wave sustaining forces: left in their place, like a body without its bones, were confusedly wallowing waters with no place to go but down.

Our early change of direction had seen the forces of Zeus pushing us far enough south that we finally intersected the route projections initially recommended by the meteorologist. By the blow’s end we were only 24nm from the recommended turning point for the final run in to Newcastle, New South Wales! It was at this point that Australis 1 could connect with a current that would push us northward once more. A short discussion, and the answer was a ‘no brainer’! In the scheme of things, the distance was small, despite running against a north bound current for the remaining miles to the turning point, the benefits far outweighed the cons. Australis 1 continued southbound for a few hours longer and with the winds astern of the beam, we avoided worsening what was already an uncomfortable ride.

That was another major positive!

The birds returned! Another albatross: this one had black top wings and white with black spots on the underside!

1820, the 20° turn that put us on a heading directly for Newcastle was at long last made. Finally we could see the light at the end of tunnel: no more storms or zero wind excepted!