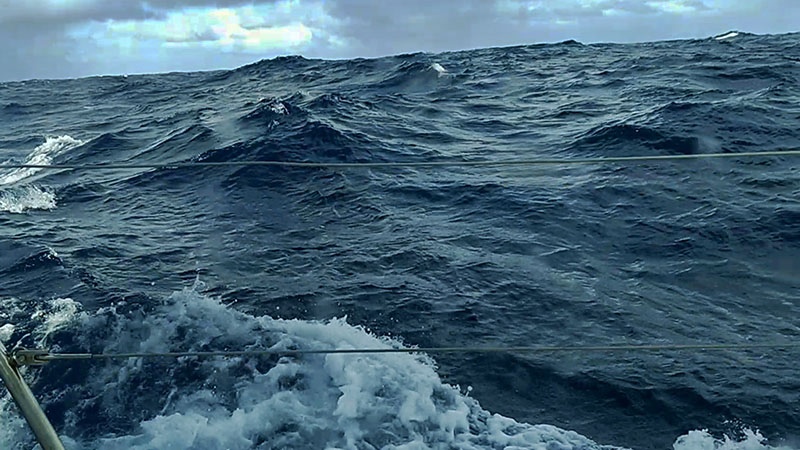 After yet another boisterous night, a ‘massive’ 28nm were attained over a five hour duration.

0400 and we sighted the bright as day lights of fishing boats upon the distant horizon. Yes, civilisation wasn’t far off now and our hearts lightened when the numbers on the GPS read 64nm remaining until the final waypoint.  If out of the blue squalls didn’t arrive to put a spanner in the works, landfall would take place sometime in the late afternoon.

The morning progressed and winds commenced lightening around the time that Australis 1 found herself in the flow of the northbound current. Although still a mite uncomfortable in still confused seas, conditions were certainly much less boisterous as the waters turned glassy and our girl found herself sailing more in line with the movement of the waters.

0940, and at 40nm out, the peaks denoting Coffs Harbour were visible in the north. With the push of the current and the gentlest of breezes assisting, Australis 1 wasn’t doing too badly under the poled gennie.

With Newcastle being a major bulk port, by now boats of all shapes and sizes crossed hither and thither. There was a moment when Bob had needs to radio a ship’s captain to ensure we were in his sights whilst he was undergoing manoeuvring: all was good there!

Seas continued becoming increasingly flatter and glassier, but as with the whole of the journey, even this close to shore they never fully lost their confused rocking motion.

Midday. The breeze died: how typical of good ol’ Murph! Not desirous of yet a further night out there – one never knew what Poseidon had in store – now was the perfect time to make use of that remaining fuel. At a speed of 6kn, only 4h20m remained: that current assist was out of this world. We would arrive just in time for sundowners!

1515, 15.5nm and a time of two and a half hours remained. Our excitement was growing, but now we were pondering what the news would be regarding COVID19 and quarantine expectations on our arrival. Would we have permission to remain on board for the last two days or be required to head down to a Sydney hotel where we would have a greater chance of contracting the dreaded lurgy. We would have to wait and see.

Arrival at the channel entrance to Newcastle took place just prior to the clock striking 1700: beautifully timed. A radio call to port control, permission granted and in Australis 1 motored. With lockdown still in effect, the shoreline was practically devoid of people: quite a surreal effect.

Arriving at the quarantine buoy, a further challenge on discovering the mooring line encased in sponges. Hmmmm, this wasn’t utilised very often. A quick discussion, another line dropped down and tightly looped around the clearest section of the buoy’s line and then attached to the cleat on the boat: we were set.

A radio call to Customs who said ‘they’d deal with matters on the morn, and we were ready for the night. Sundowners was an absolute delight!

In the end, our 5 – 8 day journey had extended to 12, but that’s the thing about good old Father Neptune and the weather. Predictions are all well and good, but one can never presume to set full store by them. Add to the melting pot, a 30+ year old yacht with a capacity of 600L in addition to systems requiring some repairs and one had an interesting mix.

The Tasman, or the Ditch as it is called, certainly lived up to its reputation for us and provided some mighty interesting times. That aside, the four of us also had fun and experienced some ‘wow’ moments. Rainbow after rainbow reaching across the firmament, albatrosses by the dozens, dolphins and those tiniest of birds!

Do I personally desire experiencing the Ditch crossing a second time? Right at this moment in time, it’s a resounding ‘NO’. That aside, since Bob and I wish to experience more of New Zealand, one should never say ‘never’.