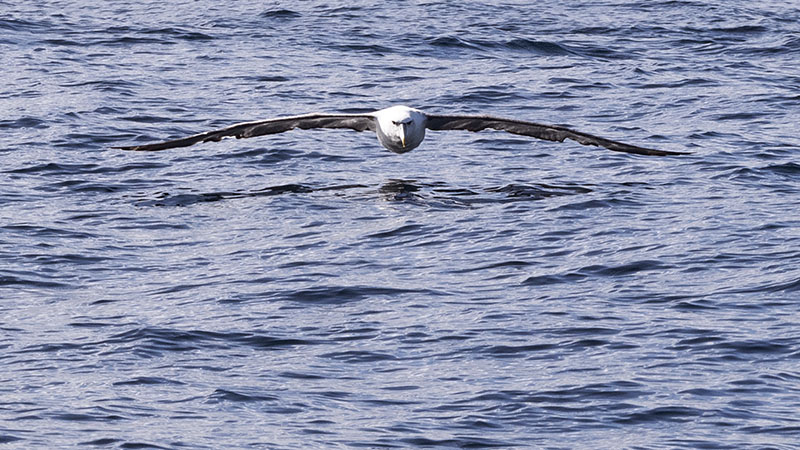 An uneventful night led us into morning and by daylight – about 7am – we were almost opposite North Cape.

To our relief, the early hours had brought with them a return of the wind at a workable 11 knots and our beauty was holding steady, so once more it was possible to conserve fuel by letting the Gennie fly.

directly in our path blew our socks off as like rockets they sped across the water leaving in their wake a trial of white foam before taking to the air where they gracefully soared upon the currents of air over the next hour or so.

Arriving at North Cape a lone cargo ship steaming past would be our last contact with people for some days.

Midmorning, there was surprise all round as small visitor landed on board.

Exhausted, he desired a short break as he rested upon the rescue device before departing to climes unknown – but our guess was Oz. Later investigation showed it to be a European Gold Finch that had at some time in the not so distant past been introduced to Australia and New Zealand. It was interesting to see how that inbuilt migration system still took over as the winter season commenced heralding its arrival.

Lunchtime. Roughly a nautical mile away and just off the port bow, about a large black mass floated upon sea’s surface. On drawing level, we found it to be a large pod of dolphins set in a circular formation. Floating mostly, motionless upon the surface, they appeared to be leased ten deep. Around the main group swam a multitude. As we sailed into range of them many created a water ballet as they leapt, dove and tail slapped – as though warning us to keep well clear as we passed. All the while, additional dolphins raced in from all directions to join the pod. This was a behaviour none of us had viewed before. Was there a dolphin birth underway, we wondered?

An hour past lunch Cape Reitinga at the northern most tip of New Zealand was passed. This was our last sighting of the New Zealand mainland and it was with sadness that we said our goodbyes. Born of the rim of fire, we four all agreed this amazing land had surpassed our expectations by far.

Farther and farther into the open waters Australis 1 motor sailed, and in a matter of hours the seascape was devoid of all landforms.

Towards mid – afternoon the beckoning peaks of Three Kings Islands commenced showing their heads on the horizon. A wildlife sanctuary, permission was required prior to landing, and this meant the visitor had needs to arrive on mainland New Zealand, sign in at customs, then gain permission to visit these isolated beauties. This is certainly a bucket list item for our next visit to the land of the white cloud.

By sundowners, 495 nautical miles remained until our next waypoint. Over the duration of the day, winds had ranged between seven and fifteen knots as a series of squalls passed above us with frequency. As all our first evening, the winds died and left us bouncing in the rocky seas.

Yes, you guessed it. On went the Iron Main!!!