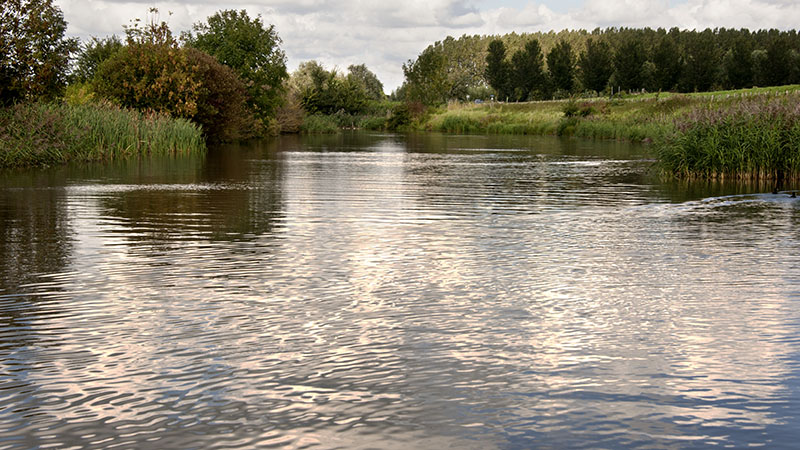 With practically a click of the fingers, the clouds were blown away and out came the sun. We two Aussies don’t deal too well with days of grey!

On went Betsy – Bob renamed her – and off down the Spui went we. Other than for a working barge, the river was ours.

Some time later, Gratis nose onto the Haringvliet which, prior to the construction of the dykes was also part of the sea. Yachts were out sailing, making the most of the fine weather.

Now heading east, Tiengemeten Island to our right appeared to be a nice place to visit.

Arriving at Noord – Hellegat, we turned Gratis to starboard and entered the lock placed there. A slow descent later, she emerged into the Volkerak. Keeping close to Overflakkee, the mainland passed by on our left.

Arriving at Overflakkee’s south eastern tip, Gratis followed the island’s coastline westward until almost opposite locks for the large barges. Here on the right, was an almost hidden entry, highlighted only by the red and green lateral marks leading to it.

Toward the land turned Gratis. Through the binoculars, an open flood gate could be differentiated from the landscape. On arrival at the opening, Gratis entered a story book setting. Peaceful and green, birds went about their business in this tree and reed lined canal.

Rounding a bend or two, yet a second flood gate was passed through. Here boats of all shapes and sizes lined the canal. Following the channel further in, a the habour master’s office could soon be seen on the right.

A friendly greeting welcomed us, as the young woman on duty came out to assist when we pulled in to moor. Directly ahead of us, the canal ended abruptly, surrounded by what appeared to be the town square. From a van parked on the edge, the aroma of freshly cooked fish tantalised the senses and beckoned.

This is to be our mooring for the next few days, and we love it already!