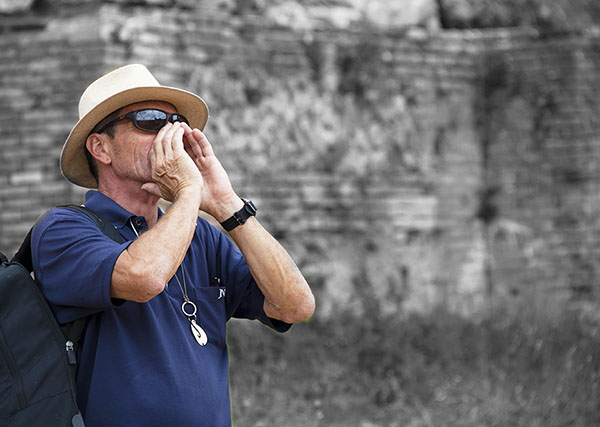 A total turn around with the weather, sunny skies and humid: perfect for lunch

and a trip to Nikopolis,

which was situated just 5km out of Preveza: where the towering mountain tops over looked the ancient township and sky blue waters of the Med lapped the shoreline.

whilst blooms of pastel pinks and mauves, or vibrant reds and yellows,  in turn either softened or brightened the sombre crumbling ruins of varying shades of black and brown.

Sadly, this treasure was not as well organised as that in Albania, with long walks

on the roads and the remains continued to crumble as care wasn’t taken: the theatre was the worst.

This was the city founded by Octavian Augustus in commemoration of his victory over the fleet of the Mark Antony and Cleopatra in 31BC in the Battle of Actium.

Surrounded by a perimeter of fortifications 5km in length

this metropolis was in a crucial position (both economically and socially), thereby facilitating its governance over western Greece and the world as known to them. The remaining populations of nearby townships, along with their possessions were moved to this hub, which was created from both the spoils of war and contributions.

The centre’s demise commenced during the 3rd century BC as the Roman Empire experienced the onslaught of Barbarian attacks and earthquakes hit the region. A short term revival took place in the Early Christian epoch when it became an artistic and intellectual centre. BY the 11th century, Nikopolis had been truly abandoned.

Stopping for a moment’s respite, one could picture the scene of the hustle and bustle of a thriving metropolis, whilst the roars of the crowd in the odium

and sports arena filled the air.

A once exquisite fountain, now crumbling, now displayed the shells within.

It was the odium and

the mosaics that highlighted our trip.