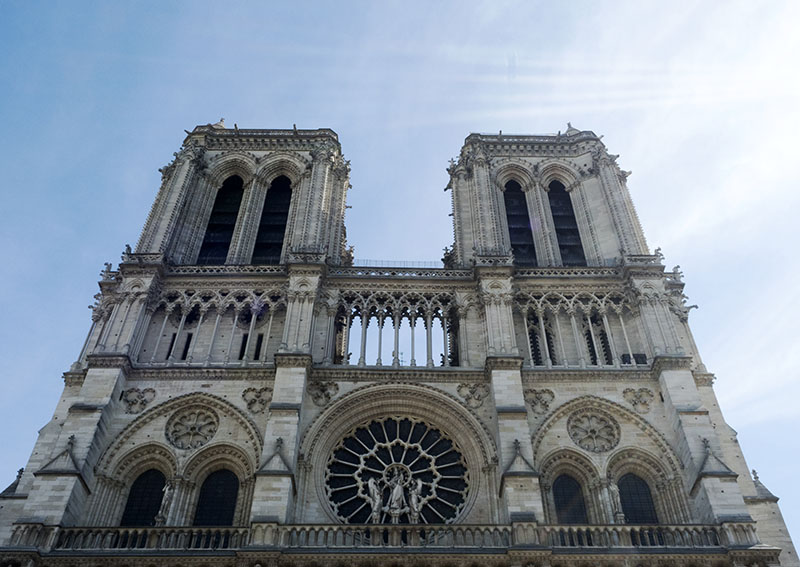 First off the Notre Dame.

Today an iconic structure, but in an earlier time, it was Victor Hugo’s novel, ‘The Hunchback of Notre Dame’ that brought this Gothic landmark to the world’s attention.

With the advent of Gothic architecture, it was possible at last to create structures that both reached to the firmaments and allowed light to enter. For the first time the support system of flying buttresses, pointed arches, rib vaults and lighter wall structure enabled a building to attain significant height.

At one hundred and thirty metres in length and forty eight wide, it is the Notre Dame’s height that truly amazes. Standing thirty eight metres in height, the structure towers over the landscape and one feels as small as an ant when alongside: it really enables you to glean how our miniscule creatures must feel.

On entering stained glass windows almost ten metres in size – unique at the time they were constructed – draw the gaze.

We love the depiction of the devil.

The paintings were beautiful.

Some of the works were quite intricate.

Then it was time to see the Eiffel Tower from a land perspective.

Sadly the view of the tower has been forever altered, since in an effort to protect it and people from terror attacks, today the structure has been placed behind a combination of 3 metre high bullet proof glass and metal fences. In addition, large blocks are being installed to prevent drive through vehicle attacks.

For us, the best view was from the water.

About the Notre Dame

Having read Edward Rutherford’s novel London, I believe that titled ‘Paris’ would be an interesting read. I am about to commence my own read of it.