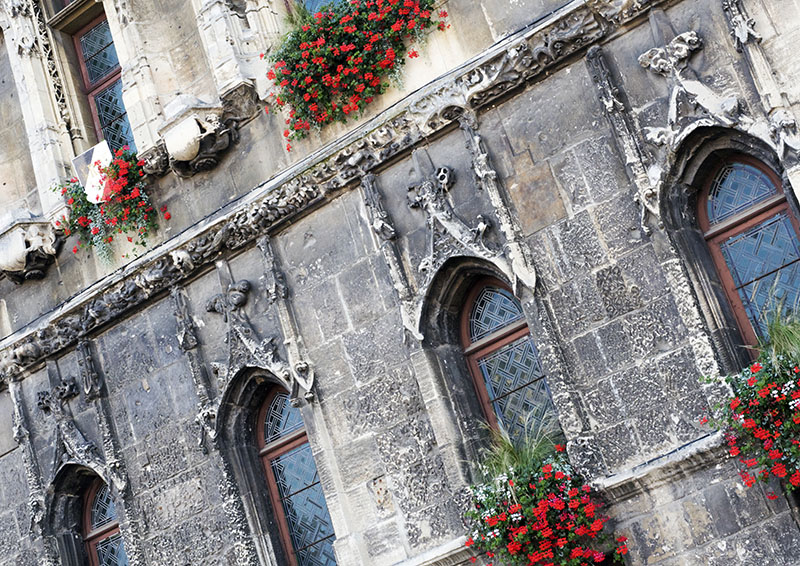 Nestled on the lower slopes of two hillsides between which the River Verse runs, the old township of Noyon

is a beautifully restored medieval township.

How we feel for the poor beasts of yesteryear.

Bob and I enjoyed our wander through the Calvin Museum, the house in which the theologian, John Calvin, was born in 1509.

The town museum with its beautiful paintings was also worth meandering through.

This diagram provided an interesting insight to the town’s layers of development since the year 200.

From the Roman era.

A sewing kit and necklace were just a few of the artifacts on display.

We both liked this.

In its heyday, the township was an important clerical centre and its 12th century Cathedral of Notre-Dame (the fifth constructed on the site) is an impressive rendition of the Romanesque – Gothic style.

It is worth visiting Noyon to view this impressive medieval circle of clerical structures: the church,

the cloister and garden with its well,

the homes of the cardinals set in a semi – circle across from the monolith (afraid I was happy with the results), the cobbled roads,

and this exquisite structure of wood

with its sheltered pathway.

Bob and I also admired the impressive doors through which one entered.

Noyon commenced as a holding of the Veromandui, a Celtic tribe of what was then Belgic Gaul.

Taken by the Romans, then named Noviomagus Veromanduorum (new plain of the Veromandui).

Ramparts mean for protection from the Germanics, were constructed as early as the 200s.

768, Charlemagne and his brother crowned as Kings of the Franks in Noyon.

987, Hugh Capet, first of the Capetians and considered the first king of France was crowned in Noyon. Up until then kings had been of the kingdom of West Francia.

The gothic architectural style first emerged in this region, and the Cathédrale Notre-Dame de Noyon was the first cathedral of its type in the world.